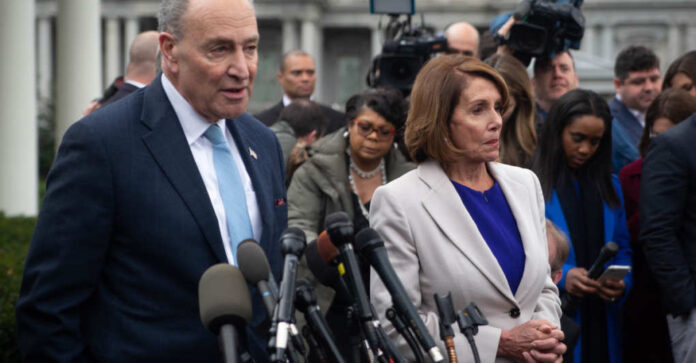 Nancy Pelosi and her House of liberal followers united together to party-line vote a massive socialist spending bill into its next phase of approval. The $1.7 trillion monsters will head up to the Senate for debate and vote before it can make its way to the president’s desk. Biden has lied to the American people by stating the bill is to help the country “Build Back Better” through the Act he is trying to pass.

The problem with Biden’s bill is that it does not represent a collective effort on both sides of the aisle to pass a bill. It is nothing more than a liberal forced mistake that will affect the next generation, who will suffer financially because they will have to pay for the enormous cost of the bill.

The social side of the bill will harm America as it will force people to give up their freedoms and begin to rely on the government for its help to survive. The massive price tag of Biden’s previous waves of spending bills has already caused massive inflation rates and lower-paying jobs. But in the Senate stands a few moderates that do not like what they are seeing in the bill and are threatening to stand in the way so it does not kill the country.

Joe Biden has claimed in his speeches that the bill will not cost a single thing. But the Congressional Budget Office has already reported that the bill will increase the deficit by $750 billion over five years. Somewhere along the line, Biden has lied to the people and is ignorant of the cost of a bill that he knows nothing about.

Biden’s Congressional Budget Office seems to be in error since The Committee for a Responsible Federal Budget has stated that it will cost $4.91 trillion over the next decade. The problem is that the Democrats are spending money that is not supported by a reliable source, and they think they can print whatever they need.

The Democratic Party wants to expand the welfare system so that people get stuck depending on it for the rest of their lives. There is no push for those people to be better because the liberals have taken the American Dream from them.

Jim Banks is the chairman of the Republican Study Committee and has broken down the bill into understandable parts. He notes that the bill gives power to the federal government to regulate prescription prices, allow Biden to spy on private citizens, bring back racial segregation on epic proportions, allow people to cry racism whenever they want, set up a liberal spending account worth trillions of dollars, push Critical Race Theory and other dogmatic lies in the school systems, allow Biden to use the IRS to target citizens for more money, control guns, keep people out of work and limit faith-based childcare facilities from basically operating.

The trademark setup mirrors that of a socialist country that has fallen into ruin because the once proposed system is an unsustainable model. It allows one person to assume control of a country and do whatever they want to the people. While at the same time allowing that dictator to pile up massive amounts of money and live a lavish life off the blood of their enemies.

The Democratic Party needs to push this bill down the throat of the political system before they are voted out of power in 2022. Their incisive push to destroy the country is on full speed ahead as the election time grows near.

Joe Biden has long ago abandoned the American people to the ideology of the communist east. He lied to get people to vote for him, and when that was not enough empowered people to lie and cheat their way through the election process so he could appear to be the winner. The old man is not competent enough to do the work of working for the people. Instead, he has to try and make himself a dictator in a country that stands as a beacon of hope for those stuck under the oppressive thumb of communism.