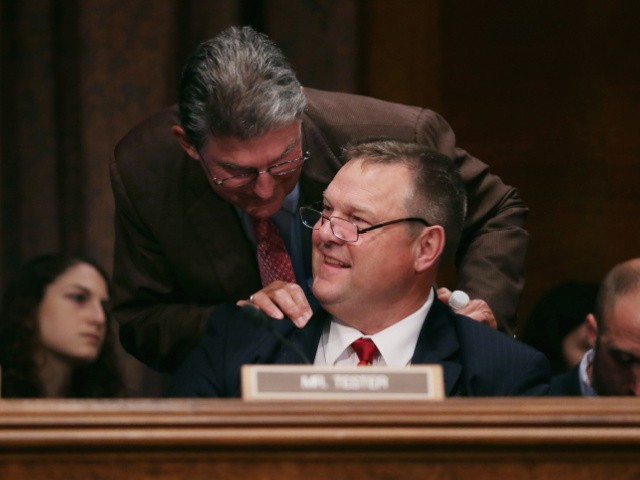 On Wednesday, the Senate voted 52-48 in favor of Sen. Mike Braun’s (R-IN) Congressional Review Act, which would essentially “disapprove of and nullify” Biden’s Occupational Safety and Health Administration (OSHA) rule forcing businesses with 100 or more employees to mandate vaccines or implement testing requirements.

Just two Democrats, moderate Sens. Joe Manchin (D-WV) and Jon Tester (D-MT), voted alongside Republicans in an effort to protect roughly 80 million workers from facing the chance of losing their jobs or livelihoods over the jab.

The measure faces a tougher battle in the Democrat-led House, although Rep. Fred Keller’s (R-PA) Congressional Review Act (CRA) resolution has the backing of the entire GOP House conference, putting a 218 majority in reach of House Republicans.

“Every Republican member of the House is united in our effort to eliminate President Biden’s unconstitutional vaccine mandate for America’s businesses,” Keller announced on Wednesday:

Private employers and workers have worked too hard to recover from this pandemic to have their livelihoods ripped away over what should be a private medical decision. I urge my House Democratic colleagues to stand with us and the 80 million Americans who would be affected by this totalitarian measure.

“Anybody that doesn’t sign on to it can’t claim to want to protect your liberties and freedoms. We took an oath to uphold the Constitution of the United States, which guarantees us rights,” Keller said during an appearance on Breitbart News Saturday.

“It tells us we limit the power to the government, we the people, not the other way around,” he added, noting that lawmakers “either stand with the overreach of power from an executive, or you stand with the freedom and liberties and the American people.”

Notably, OSHA’s rule has been temporarily suspended due to ongoing litigation.