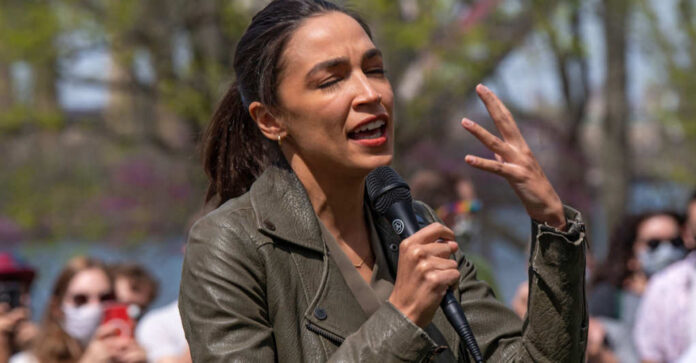 Alexandria Ocasio-Cortez is never one to focus on the facts. If she doesn’t like the way that something is reported, she simply shuts it down. It’s made up, right? Her complete denial of organized retail crime happening in liberal cities is laughable, especially when there’s evidence that it’s happening around every turn.

And, much of this organized retail crime has continued in a variety of liberal-run cities. It’s happening in Los Angeles, Chicago, New York City, and elsewhere.

Walgreens told the Washington Times “Organized retail crime is one of the top challenges” that they are faced with. They have explained that it “has evolved beyond shoplifting and petty theft to the sale of stolen and counterfeit goods online.”

AOC refuses to believe it. In fact, she’s gone as far as claiming that it’s all false. She told the Washington Times that “A lot of these allegations of organized retail theft are not actually panning out.” She mentioned how a Walgreens in California cited the crime was happening but that the “data” didn’t back it up.

Many people are asking themselves, what data? What in the world is AOC talking about? Of course, she won’t come out and say what “data” she is referring to because, of course, there isn’t any. She just doesn’t like that this crime is ruining the liberal narrative.

It’s all a load of crap, and it seems that everyone knows it except for AOC.

Smash and grabs are happening in more and more places – and much of it is because of the ‘defund the police’ movement. Criminals know an opportunity when they see one. The liberals have reduced the amount of police presence on the streets. This means that the criminals feel as though they can make a quick smash and grab without getting caught. And in many instances, they’re absolutely right.

To admit that the ‘defund the police’ movement was a bad one would weaken the progressive agenda. AOC can’t possibly turn her opinion around and demand that the cities increase their police presence to protect individuals and businesses. So, she’ll just deny that any crimes are happening – even if there are videos all over the internet of people committing organized retail crimes.

AOC just closes her eyes and hums. It’s the easiest way for her to go back into her La-La land happy place to pretend as though she and her liberal pals are right about everything. She’ll spend her days tweeting about how amazing the Build Back Better plan is and how no one should have to pay their student loans back.

While AOC may be in complete denial about criminal activity happening around the country, there are plenty of members of the GOP with their eyes wide open. And as more people become victims of these crimes, they’re more likely to vote for the people with eyes open instead of closed.