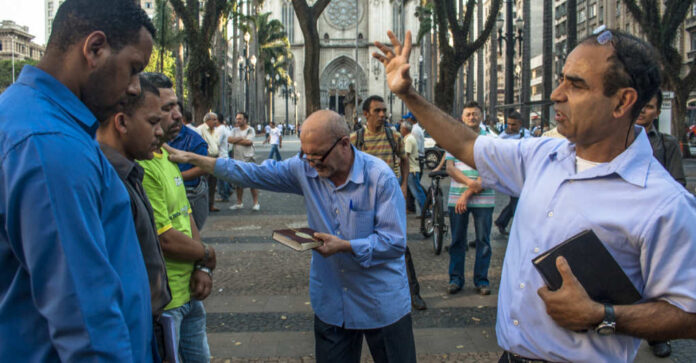 In an effort to create their own stereotype of what it means to be pro-life, one pro-abortion writer blasted those who want to save the lives of pre-born babies as having “white, evangelical anger” over abortion.

Abortion has claimed the lives of 63 million pre-born babies since 1973. And to be sure, there is a certain month of righteous indignation at the thought of such tragedy. But a very progressive writer took a giant leap in an article written for The Guardian.

Jessica Glenza wrote the article that argued that the attempts by state legislators to restrict abortion access have made 2021 “the most hostile year to abortion rights on record.” She then erroneously said that four in five Americans believe abortion should be legal, at least in some circumstances. Some studies indicate that roughly half of Americas consider themselves to be pro-life.

Glenza believes the religious Right in America has been laying the foundation for decades in the recent challenge to abortion in the Supreme Court.

In Dobbs v. Jackson Women’s Health Organization, there seems to be a good chance that Roe v. Wade will either be revised or overturned. Glenza referred to the political machinations in political campaigns that have intersected with almost every major issue in politics for the last five decades. She connected abortion with segregation, welfare reform, and campaign finance.

The Guardian reporter then used language like “Republican operatives” who led and fed “evangelical anxieties” so that they focused on abortion and defense of the fetus instead of the more pertinent issues in the land. She even cast shade on former President Ronald Reagan for casting the politics of reproduction through a “new racist prism.”

And Glenza finished her rant against angry evangelicals by lamenting what might happen to young, poor people of color when they are forced to carry pregnancies to term. She said that if Roe v. Wade was overturned, the outcome would be “so severe” that human rights advocates would need to be activated. Glenza even said that she believed state abortion bans would violate the United Nations conventions against torture.

But James Silberman, the communications director for Free the States which is a Christian organization working for the immediate abolition of abortion, called out Glenza by showing the irony in saying that young people of color will suffer most if abortion is banned. He noted that there are more black babies murdered in some parts of our country than there are black babies born.

Silberman also countered the idea that those who are against abortion are racists. He revealed that Planned Parenthood was founded almost solely by eugenicists that included KKK Exalted Cyclops Lothrop Stoddard.

Free the States has produced a new documentary called “A Storm Comes Rolling Down The Plain.” It gives details about half of the country who consider themselves to be pro-life. In the documentary, Silberman says that many who are praying to end abortion will see more restrictions from the government.

“We must stand on conviction and pass laws consistent with the truth, lest we come to believe lies. We must demand the total and immediate abolition of abortion,” Silberman said.

In Mississippi, those who are staunch pro-abortion advocates are planning for what will happen if the Supreme Court upholds Mississippi’s ban and overturns Roe. Valencia Robinson, the executive director of Mississippi in Action, promised that they would not go underground. Mississippi in Action advocates for people living with HIV and provides education about sexual health. Robinson said that she, along with others, was already working to mobilize drivers to transport patients to places they can get abortions. And she described building up donors who will help pay the costs for abortions.

The stakes have never been higher. Glenza claimed that the pro-life movement is being driven by angry, white evangelicals. But the truth is more clearly seen in the many people willing to stand, silent with red tape on their mouths, praying for the end of the murder of pre-born babies.