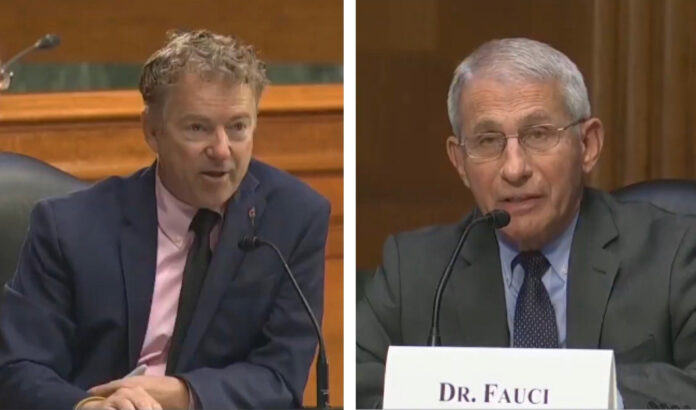 The Senate Health, Education, Labor, and Pensions Committee had a very important hearing on Tuesday, as they are working tirelessly to combat the continued spread of COVID-19. Senator Rand Paul had some strong words for Dr. Fauci during the meeting. He wanted to know about Fauci’s funding of the Wuhan lab in question.

Since last year, the Gateway Pundit has been working overtime to provide evidence of Dr. Fauci’s lab funding. The lab workers were clearly able to isolate the virus and they worked hard to make sure that they learned as much as possible about species to species transmissions. It’s hard to ignore these facts. This is what had Paul so upset.

No one likes it when you spit on their cupcake and tell them that its frosting. In 2017, we had access to solid intelligence on this matter. A viral leak took place in a high-security Chinese virology center and that is how the SARS virus was able to escape. Many were harmed but this could not be discussed then.

By May of last year, the Gateway Pundit had made additional discoveries. They found out that Dr. Fauci was funding the lab but of course, this was treated as a lie by the mainstream media. It should have been on the front page of every single newspaper and been the primary headline on all of the cable news shows.

The fact that it was not should tell you everything that you need to know here. Washington Post columnist Josh Rogan is one of the few who has been willing to speak out about this, as he is telling the world that Dr. Fauci needs to be held accountable for what he has done. We could not agree more.

“Dr. Fauci and the National Institutes of Health were responsible for using taxpayer dollars for gain of function research, to weaponize viruses to make them more contagious and more deadly,” he says. We cannot make it any plainer to those who are reading. This man is a menace and needs to be stopped.

Rand Paul just might be the man for the job. “Dr. Fauci, do you still support funding of the NIH funding of the lab in Wuhan?” he asked. As you would have expected, Dr. Fauci was very displeased by this line of questioning and he wanted nothing to do with it. In fact, his entire demeanor shifted and he showed some raw aggression.

“Senator Paul, with all due respect, you are entirely and completely incorrect that the NIH has not ever and does not now fund gain of function research in the Wuhan institute,” he replied. You can tell that the implication upsets him. If he could have, he probably would have peppered this response with a fair amount of profanity.

Luckily for us, the last thing that Rand Paul was going to do here is back down. He got under the doctor’s skin and it is clear as day to see that. Anyone who thought that Paul was ready to let him off the hook does not know him too well. The video is a great watch and it makes us wish that we could have been a fly on the wall for this exchange.

As for those who see it differently than this? We just feel sorry for you at this point. Rand Paul has exposed the nonsense once and for all. If there was any justice, we would all have the chance to rip into Dr. Fauci in a public setting. In the meantime, we will simply have to settle for Rand Paul doing it!