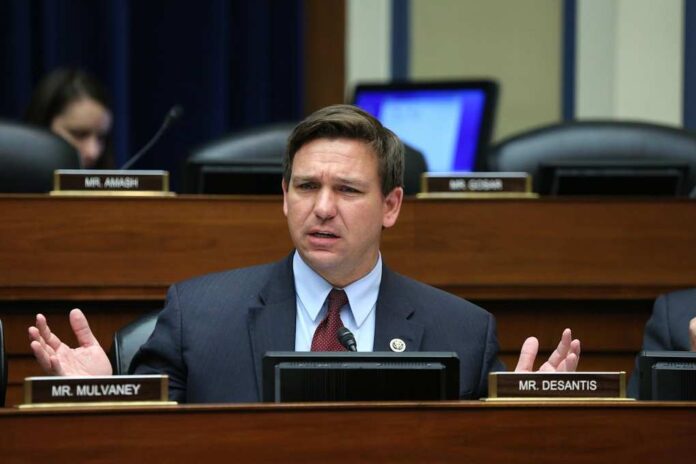 The lustful Democrats have the disastrous desire to gain as much power as they can in life before they meet their untimely demise. Their hopes center around the need to control people. They need people to worship them and look upon them as benevolent gods for their children. But when the truth is revealed, it is discovered that they are selfish and have no desire to serve people.

The Democrats took the pandemic and used it to feed their lustful desire. They put in place rules and regulations that were guided by the Center for Disease Control that were designed to restrict and stop people from living a free life.

Once again, Ron DeSantis is ticking off the maniac media by taking a stand and doing what is suitable for Americans. He came out and announced that he is filing a lawsuit against the CDC for their part in the shutdown of America because of a pandemic that they helped the Democrats exploit to the doom of millions of Americans.

The devious Democrats are getting another reality check from the Republican governor. He teaches them that they cannot keep pushing people into ruin without answering for their crimes and violations of Constitutional freedoms.

One of the first things that he did was fix election laws so the liberals could not manipulate voting trends. He then went on to file the lawsuit against the CDC. They have to answer for their part in the pain and agony they have placed on millions of people.

He stated that the main thrust behind the lawsuit centers around the decision the CDC made to lock people up in cruise ships when the pandemic first started to unravel in 2020. The order by the CDC to lock down cruise ships and the entire industry has destroyed lives and bankrupted companies.

The CDC has vaguely stated that they will allow the cruise ships to come to the United States at some point. But they have not provided an exact date as to when they will lift their pointless rule. The CDC’s recent guidance points are vague as usual. They cannot be specific because they are working for the Democrats.

The cruise ship industry has no passengers moving through the ranks. So their guidance on how to reduce COVID exposure is pointless since there is no one to implement the guidelines. DeSantis has taken the point and moved to bring reality to the CDC.

The governor stated that “If you look at some of the stuff that they’ve done on school openings, where they’re basically doing the teacher’s union’s bidding when they say these kids should be masked in summer camp outdoors. I’m sorry, that’s not science, that’s politics.”

He rightly pointed out that the CDC is doing the will of the liberals.

The liberals hate the idea of a prosperous industry. It takes away from their belief that they should be able to control every sector of industry. The governor asked the simple question, “Do you want one unelected bureaucracy to be able to have the power to indefinitely shut down a major industry in this country?”

He has recognized and exposed the secret push of the liberals to expand government into the private sector of business. The lawsuit being brought by the state of Florida is going to push the federal government back into the confines of the Constitutional role that they should have. People have the right to work and keep their businesses open no matter what part of the business world they should happen to fall into.

The Republican giant is fighting for all people regardless of their political affiliation. The Democrats do not have the right to take away the freedoms of people that have been around for hundreds of years.

His lawsuit is going to hit the CDC and their political master right between the eyes. And they are going to have a wake-up call that they have forgotten about people and have put them to ruin because of outdated beliefs about a virus that is no longer the threat it was once thought to be.