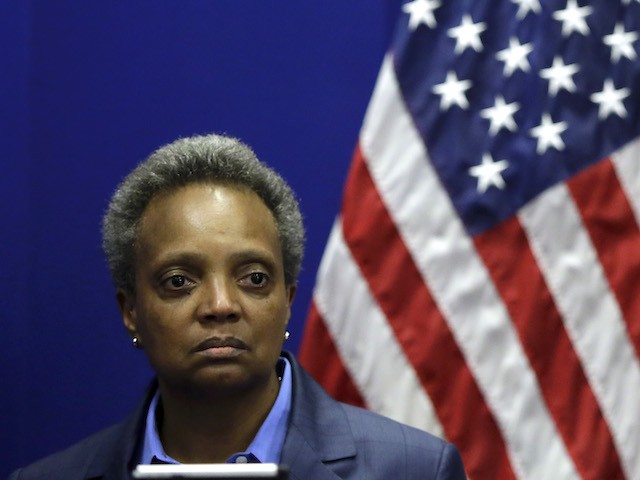 “It will continue until I beat them again in the next election,” she added.

Chicago mayor Lori Lightfoot speaks during the groundbreaking ceremony for the Obama Presidential Center at Jackson Park on September 28, 2021 in Chicago, Illinois. (Photo by KAMIL KRZACZYNSKI/AFP via Getty Images)

While Lightfoot stated she wanted aldermen to think for themselves and supported an independent city council during her time as a candidate, according to the Tribune, some of her text message exchanges seem antithetical to that sentiment.

After Lightfoot’s first budget passed, she created a website that was critical of the budget’s dissenters, the Tribune reports.

“Not understanding your decision to target Aldermen,” Ald. Maria Hadden texted the mayor. “It seems contrary to the desire for an independent City Council and I find it very troubling.”

“I am not sure why showing how people voted is ‘targeting,'” Lightfoot responded.

Hadden texted, “Coming from a political site the information is not neutral.”

In the time before the city’s 2020 budget vote, Lightfoot told black aldermen that if they were not behind her budget, then “Don’t come to me for s–.”

Ald. Walter Burnett, a black man, texted the mayor, saying her comments hampered his effort to whip votes for the budget.

“Sorry if I offended people by being candid, but it is only fair to support the people who support (your) programs,” Lightfoot responded. “In what world does the opposition get rewarded?”

Lightfoot has heavily criticized businessman Elzie Higginbottom, who wields political influence in the Windy City. Lightfoot previously told the Tribune that when she and Higginbottom make eye contact, he “goes in a different direction.”

Ald. David Moore called Lightfoot out for her assessment of their relationship in a June 2019 text message.

“Unfortunately, your comment about him going in a different direction when eye contact is made is not true and it builds walls instead of bridges,” Moore wrote.

More recently, Ald. Rossana Rodriguez Sanchez, a democratic-socialist who has believed in defunding police, called the mayor out after Lightfoot said the alderwoman “frequently calls me” to request police.

“I think it’s incredible that you would say that I call you frequently asking for police,” Rodriguez Sanchez texted the mayor. “We haven’t talked on the phone in over a year.”

Lightfoot did not respond to the message.

Law and Order Texts with Aldermen

In January of 2020, Ald. Pat Dowell texted the mayor regarding train robberies on the red line.

“South Loopers are complaining of course and there is talk on ‘leaving the city,'” Dowell texted. “My commander has taken steps to address but the public transit division of (CPD) doesn’t have enough resources.”

Dowell texted Lightfoot this past summer regarding “the lack of police response” in her ward. She added in another message that she was “frustrated with the police. They don’t engage people or deter crime.”

“Finance doesn’t ticket people who ignore parking restrictions so I have a thousand people in two parks doing illegal fireworks, drinking and smoking (weed) and peeing all over the place,” Dowell said.

Lightfoot did not get back to Dowell on the matter, according to the Tribune.

During the looting and rioting that took place in the city following the police killing of George Floyd in the late spring and early summer of 2020, Ald. Chris Taliaferro asked the mayor if she was taking steps to restore order to the city.

“Mayor, the wards are experiencing heavy looting and large crowds gathering,” he texted. “Will the National Guard or police redeploy to the south and west sides before we lose control of them?”

Lightfoot replied with images of police on the West Side and a text of her own: “Also, this problem is all over the area, not just in Chicago. And if the (Black) caucus wanted to be helpful, activate your faith, community and other stakeholders to be in the streets to help calm it down and call people out.”

He followed up, suggesting a “sunset to sunrise curfew,” prompting Lightfoot to say, “Man, I’m getting s– for even daring to implement anything!”

In September, Lightfoot had a text exchange with Ald. Brendan Reilly over the city’s crime issues after Reilly was critical of police Superintendent David Brown, calling him a “moron” who “won’t listen.”

“Brendan, shameful and unhelpful. How about pickup the phone instead falsely creating the appearance of doing someone at everyone else’s expense?” Lightfoot texted Reilly. “Really bush league.”

He’s a fine cop, but I’m looking at … my crime stats & can honestly say that, in my 26 years living downtown, I’ve never seen lawlessness to this degree. It’s sickening. So I’ll apologize for using the word ‘moron.’ And I am anything but ‘Bush League.’ I want you to be successful, Mayor & I support you. But (this) has to change ASAP. We are losing downtown.

“Lightfoot said she shares ‘the levels of concern’ but the 18th police district ‘has tons of resources so there is no excuse for what is happening,'” the Tribune reported.

Between Friday night and Sunday morning, 20 people were shot in the city with two dying, Breitbart News’s AWR Hawkins reported. On December 9, Hawkins published an article detailing the number of homicides in Chicago throughout 2021:

Over 750 people have been killed thus far in 2021 in Mayor Lori Lightfoot’s (D) Chicago, and there are still three weeks left in the year. On December 9, 2021, the Chicago Sun-Times reported a total of 754 homicides in the city.

At the current pace, Lightfoot’s Chicago could reach or even surpass the number of homicides committed in 2020.

Chicago has also been the site of extreme looting in recent months. In the hours leading up to Black Friday, a group of “organized burglars” hit multiple stores.

Between 1:30 a.m. and 3 a.m. a group of men traveling in a 3-car convoy broke into and burglarized four stores in Chicago’s Wicker Park area. A fifth store had its front entrance damaged, but it was not clear if the place was also rifled through, according to a Chicago Police Department report highlighted by crime watch website CWBChicago.com.

Looters and thieves also struck a list of Chicago stores last week in the wake of the Kyle Rittenhouse verdict. At least two incidents of groups of looters flooding stores and running out with arms full of merchandise occurred on Chicago’s South Side, and northward up through the city’s Magnificent Mile shopping district. Neiman Marcus and a Foot Locker outlet were targeted.

On Black Friday, a group of three men waltzed into a Chicago Foot Locker, filled trash bags with merchandise, and fled the store, Breitbart News reported.