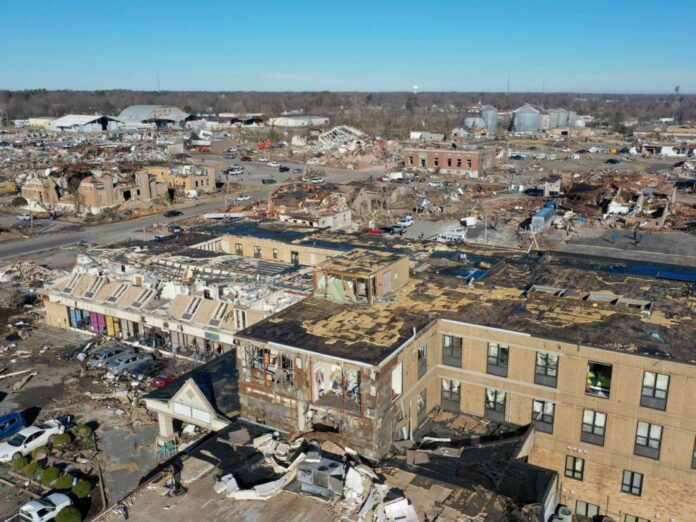 VERDICT: UNCERTAIN. Scientists do not actually know if there is a correlation between storms and a warmer climate.

President Joe Biden could not let a tragedy go by — even one of the worst tornadoes in living memory — without politicizing it for the left’s favorite cause: the crusade against climate change.

With survivors still desperate for rescue, and the bodies still being recovered, a journalist asked Biden whether the Kentucky storm was a result of climate change. He answered that while he did not know about this particular storm, he would ask the Environmental Protection Agency to investigate.

While speaking to reporters and virtually assessing the tornado damage from Wilmington, Delaware, Biden was asked whether he “could conclude that these storms and the intensity have to do with climate change.”

“All I know is that the intensity of the weather across the board has some impacts as a consequence of the warming of the planet and climate change,” Biden said. “The specific impact on these specific storms, I can’t say at this point.”

“I’m going to be asking the EPA and others to take a look at that,” Biden added. “The fact is that we all know everything is more intense when the climate is warming. Everything. And obviously it has some impact here, but I can’t give you a quantitative read on that.”

The problem is that storms have not become more “intense” due to climate change. The evidence is actually inconclusive.

As former Obama administration official Steven Koonin wrote in his recent book on climate change, Unsettled: What Climate Science Tells Us, What It Doesn’t, and Why It Matters, “hurricanes and tornados show no changes attributable to human influences” (112), and that “the best we can say is that, if anything, U.S. tornadoes have become more benign as the globe has warmed over the past seventy-five years, and we have no credible method for projecting future changes” (126).

Even an Associated Press “explainer” struggles to accept the idea that climate change is linked to the Kentucky tornadoes: “Attributing a specific storm like Friday’s to the effects of climate change remains very challenging,” it concluded. However, the AP also strained to cite scientists who said that a warmer climate could produce more thunderstorms in the wintertime.
Joel B. Pollak is Senior Editor-at-Large at Breitbart News and the host of Breitbart News Sunday on Sirius XM Patriot on Sunday evenings from 7 p.m. to 10 p.m. ET (4 p.m. to 7 p.m. PT). He is the author of the recent e-book, Neither Free nor Fair: The 2020 U.S. Presidential Election. His recent book, RED NOVEMBER, tells the story of the 2020 Democratic presidential primary from a conservative perspective. He is a winner of the 2018 Robert Novak Journalism Alumni Fellowship. Follow him on Twitter at @joelpollak.