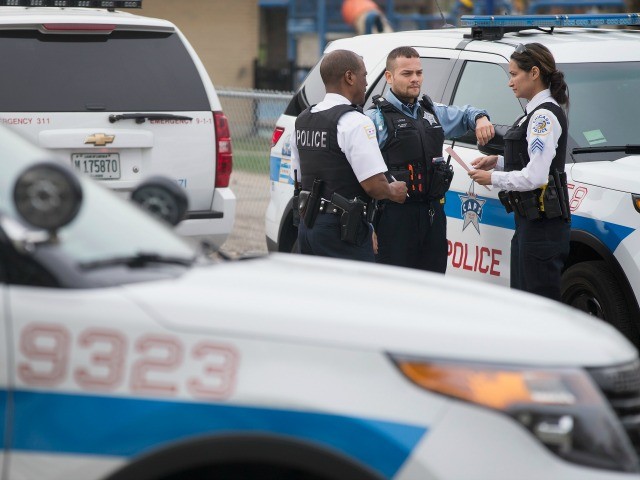 The robbery occurred on Saturday afternoon at the Gold Coast Auto Gallery in the upscale Near North Side neighborhood of Chicago. The two men allegedly stole millions of dollars in luxury watches. One man stood by the door with a gun while the other smashed the display cases with a hammer.

Joe Petito, the dealership owner, said his armed security did not engage because the perpetrator did not raise his gun.

“He was smart enough not to raise the gun because my people had guns,” Petito told Fox 32. “If he raised that gun, he would have been shot. We’d probably be in court defending ourselves.”

As many as ten customers, including children, were in the gallery at the time of the robbery, which happened in less than 20 seconds. The dealership has since been locked down and now welcomes customers by appointment only. Police have not captured the suspects.

The smash and grab crime wave has severely impacted retail outlets this past year, with up to tens of billions of dollars in losses, according to the Associated Press.

“National retail groups last month estimated the annual losses to be in the tens of billions of dollars,” reported the AP. “Some states’ attorney generals are supporting a congressional bill that would require more prevention efforts by large online marketplaces, where experts say many of the stolen goods are fenced.”

This month, authorities in the San Francisco Bay Area conducted what they described as “one of the largest retail theft busts in California history,” uncovering upwards of $8 million worth of merchandise from CVS, Target, and Walgreens.

“This level of violence has taken it to a whole new level,” Rachel Michelin, president of the California Retailers Association, told the New York Times. “No one has seen this before.”

CEOs from Target, CVS, and Walgreens recently asked Congress for help in fighting the crime wave in an open letter:

While we constantly invest in people, policies, and innovative technology to deter theft, criminals are capitalizing on the anonymity of the Internet and the failure of certain marketplaces to verify their sellers. This trend has made retail businesses a target for increasing theft, hurt legitimate businesses who are forced to compete against unscrupulous sellers, and has greatly increased consumer exposure to unsafe and dangerous counterfeit products.

In Chicago, Mayor Lori Lightfoot went as far as to blame retailers for the spike, arguing that they have not invested enough in security and surveillance.

“We still have retailers that won’t institute plans like having security officers in their stores, making sure that they’ve got cameras that are actually operational, locking up their merchandise at night, chaining high-end bags. These purses can be something that is attracting a lot of organized retail theft units,” Lightfoot said Monday last week.