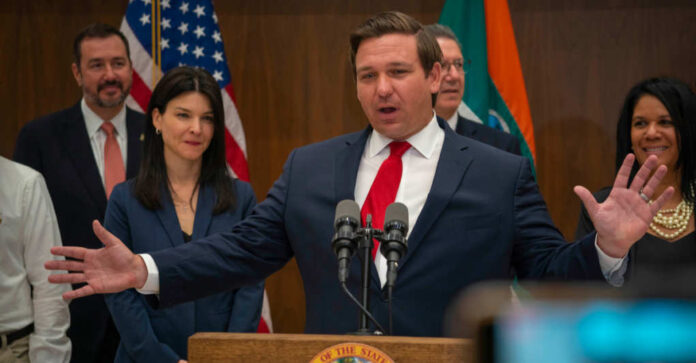 The old man Joe Biden does not know what it means to be an American. He leads a perfect picture of the communist regime destroying China. Biden is willing to punish people with a job loss if they do not take the vaccine-like he is demanding for them to do. The illegal vaccine mandate he issued a few months back is destroying jobs and forcing people to give up a life that they have worked hard to build for themselves.

Medical doctors and nurses all over the country are some of the hardest hits. Many of them who refused to get the vaccine have been forced out of work or fired for doing what they believed to be the right choice for themselves. And such is the story of a doctor named Jeff that had the privilege to meet with Ron DeSantis and talk about his experience.

Biden knew precisely what he was doing when he issued the mandate. Jeff was a doctor that was suspended because he would not bow to the wishes of socialism and get vaccinated for a virus that keeps changing. Because people need to work to eat, in his mind, if they refused to get vaccinated, they would not be able to work or eat because they would have no money.

The loveless president could care less about what happens to people. But that is where Republican governors step up and do what is suitable for each person. Governor DeSantis met with Jeff and found out that he was suspended. But because of the efforts put forth by the governor and the Florida state legislature to ban federal overreach in Florida, Jeff is back to work.

Ron DeSantis has kept American-based freedom in Florida. Joe Biden is trying to suck it out of other states, but Florida has taken steps to keep the state free and bound to the Constitution. The destruction of America by Biden will not affect the Sunshine state because a Republican has bolstered the laws to keep people free.

Brandon, Florida, was the site of signing the new bill that limits Biden. The president sits as a dictator in a free land, but he quickly finds out that the two are not compatible. Biden cannot act as a dictator without facing some tricky spots. He has already suffered through multiple lawsuits, which he lost.

DeSantis stated at the signing of the anti-Biden bill that “We’re really excited to be here, especially because when I sign this legislation today, we hear so much about all these things: mandates, restrictions, tearing people down. Today, we lift people up. We provide protections for people: no nurse, no firefighter, no police officer, no trucker, no anybody should lose their job because of these COVID jabs.” And Jeff is just one of many that owe their jobs to the governor’s protection.

The only way a state can resist the federal government’s overreach is by bypassing its legislation that dictates what will happen within the state. Floridians declared with a loud voice that they were not going to subject themselves to the whims of an unstable man. Joe Biden has deliberately ignored the Constitution and is constantly trying to pull a fast one on the American people under the pandemic banner.

The federal government has never tried to mandate a vaccine-like what Biden is trying to do. DeSantis asked if Biden could mandate anything once he decided it was time to push the issue. But the answer to that question is that Biden cannot do what he wants because he is duty-bound to uphold the Constitution, which he has failed to do for a year.

Republican governors all over the country have done various things to put Biden to shame and keep him from destroying prosperity and life. The choice to vaccinate or not is something only the person getting poked in the arm can make for themselves. It is not up to Biden or anyone else to force it on them.