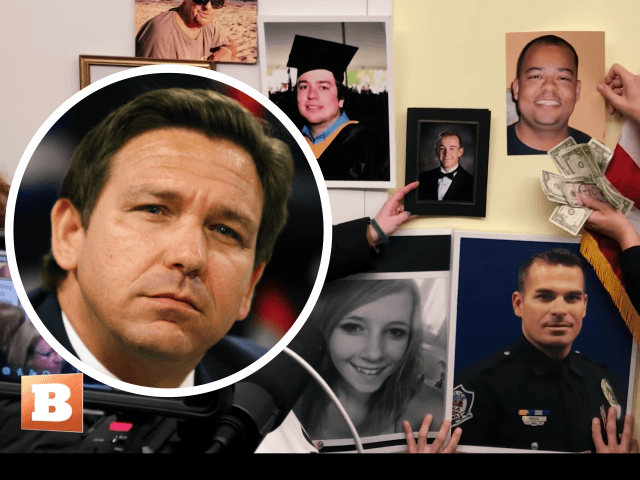 “I thank Governor DeSantis for placing Floridians first, by stopping this insanity and making sure resources are not spent on illegals,” Angel Mom Sabine Coulter, whose son Dominic was murdered in July 2012 by an illegal alien, told Breitbart News.

“We need every governor to place citizens above illegals and help stop this invasion that affects every American citizen and legal immigrant,” she added.

As Breitbart News exclusively reported last week, DeSantis has implemented an emergency order that bans the issuance or renewal of all state licenses to Florida Department of Children and Families (DCF) facilities that provide services to Unaccompanied Alien Children (UACs).

Angel Dad Chris Odette, whose 13-year-old daughter Chrishia was killed in 2014 by an illegal alien, praised the move as a “good start and long overdue” but said Republican governors should take initiatives to stop illegal immigration further.

“Revoke and bar license to any company requiring or holding a license or permit to operate that employ an illegal alien, revoke or deny licenses and permits to any apartment, house or lease agency or residence preventing housing for illegals,” Odette said, listing policy recommendations.

“And bar banking institutions from accepting Individual Taxpayer Identification Numbers (ITINs) as a form of ID for financial transactions. Lastly, any charity organization aiding in [illegal immigration] should lose any state tax exemption status they may have,” Odette continued.

DeSantis, in part, is looking to make major changes to Florida law to drastically disincentivize and reduce illegal immigration to the state. In a legislative package, DeSantis is seeking to effectively outlaw business with the non-governmental organizations (NGOs) who aid in illegal immigration.

Such a policy would almost certainly financially cripple NGOs in the state.

Angel Mom Kiyan Michael, whose son was killed by an illegal alien in Florida in 2007, said that as a native of Jacksonville, keeping her family and others safe is paramount. Michael is currently running for office in the state House District 12 race. She said:

I am grateful that our Governor DeSantis is once again providing strong leadership today by proving that Florida is not a sanctuary state … the Biden administration has been secretive about these nighttime flights and as a community, our families deserve to know who they’re bringing in and ensure that we don’t have more preventive tragedies.

Angel Mom Agnes Gibboney, whose son was killed by an illegal alien in 2002 in California, told Breitbart News that she wishes President Joe Biden “would have such courage and determination to stand with the American people.”

“Finally, a governor with courage and determination to stand with the American people,” Gibboney said. “… Governor DeSantis is standing alone and gaining much respect from the nation.”

Angel Mom Mary Ann Mendoza, whose son was killed in 2014 by an illegal alien, told Breitbart News that Americans across the country “who are paying attention to the invasion at our southern border, facilitated and aided by this administration, are wishing for a governor like Ron DeSantis in their state.”

“Governor DeSantis has stood up to this administration and is working tirelessly to keep Floridians safe and to also protect the economic health and well-being of his state by trying to prevent these illegals from becoming a state responsibility and burden,” Mendoza said.

Mendoza is currently running to fill a state House seat in Arizona.

Shari Rendall with the Federation for American Immigration Reform (FAIR), which fights for lower immigration levels to the United States, said DeSantis’s order is “needed to protect Florida’s children from the Biden administration’s policies to smuggle illegal alien children into the country.” She continued:

They are forcing states like Florida to divert their limited resources for foster care in their state to children (and adults posing as minors) who entered the United States illegally. Florida’s children shouldn’t be kicked to the side to support the Biden administration’s misguided policies.

As Breitbart News has reported, Biden’s agencies expect that more than two million border crossers will have arrived at the U.S.-Mexico border by the end of the year. Meanwhile, as of late October, Biden has released more than 530,000 border crossers and illegal aliens into the U.S. interior. Thousands have ended up in Florida.