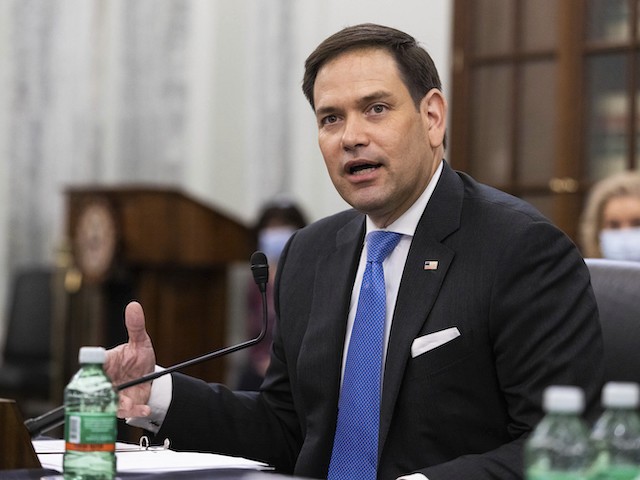 In the letter, Rubio demanded to know why the Biden Administration “downgraded” Taiwan’s representation at the December 10 summit and then cut a video feed of Taiwanese Minister Audrey Tang after her livestreamed remarks showed a map that suggested Taiwan was not part of China, contrary to China’s position.

Rubio explained in his letter:

Taiwan was represented by Audrey Tang, a Minister-without-Portfolio who manages digital democracy programs, and Hsiao Bikhim, Taiwan’s representative to the United States. While both of these officials are highly accomplished and impressive in their own right, neither of them was elected to the position that they currently occupy, and most importantly, the other nations at the summit were represented by their heads of state. Countries that asked to delegate their representation to a lower level reportedly met stiff resistance from your administration.

Rubio suggested that the move was a concession to Beijing, since having Taiwan’s president would have angered China, which insists that Taiwan is part of China and not a separate country. Having Taiwan’s president appear at the summit would have also angered China since Taiwan was invited to participate but China was not, and China typically pressures international bodies not to allow Taiwan to participate in forums and summits. Rubio wrote:

Decades of a failed engagement policy should have taught us by now that making concessions to Beijing is a one-sided and fruitless endeavor. And yet it continues. All that your administration accomplished in downgrading Taiwan’s representation was to once again signal weakness rather than resolve. The [Chinese Communist Party] still threatened Taiwan and railed against the summit.

Rubio argued that unlike other forums where the U.S. cannot unilaterally decide whether Taiwan can participate, the U.S. had “carte blanche” to determine who participated in the summit and at what level. He said:

When you had the opportunity to set equitable rules of the road for a new international forum, free from Beijing’s malign influence because the CCP is, by its nature, disqualified from attending, you still chose to accommodate the CCP’s unreasonable demands.

“Taiwan should have been represented at the summit by its duly-elected head of state, President Tsai Ing-wen, not by an unelected lower-level official of your choosing,” he added.

Rubio also cited reports that alleged the White House cut off the video feed of Tang’s remarks because she displayed a map of China and Taiwan in different colors, suggesting the two were different countries. “If true, this is yet another concession to the CCP,” Rubio said.

The Florida senator demanded to know the answers to who made the decision to downgrade the level of representation for Taiwan, when and why, and what steps the administration plans to make to amend for the “mistake.”

“I understand that the summit will convene again next year. It is my hope that you clarify and correct this mistake going forward, and prove beyond a shadow of a doubt that the United States’ commitment to democracy will not be calibrated in the futile pursuit of the approval of our authoritarian rivals,” said Rubio.