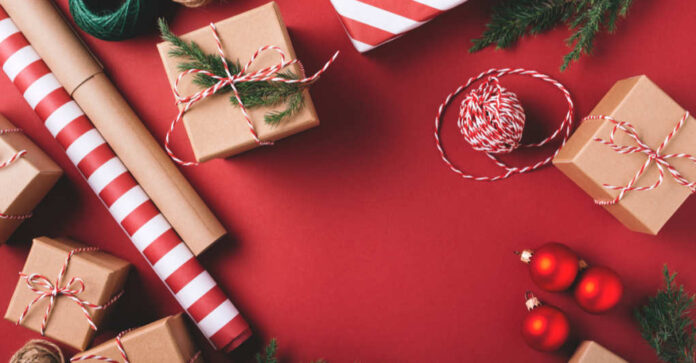 Ever since the day the media tried to cover up an anti-Biden chant at a NASCAR race, the sentiment has grown to a nationwide ordeal perfected into the minds and hearts of all who are tired of being manipulated by Joe Biden. The “Let’s Go Brandon” chant has been the message that millions have come to express as their disapproval. But the fun does not stop there as businesses are growing tired of the constant attacks from the president’s destructive policies.

One company is taking the president’s favorite chant to the next level by putting it under the Christmas tree of homes across the country. Bring Ammo has taken the chant and placed it on their wrapping paper. They have printed 3,000 pounds of pointed paper to get the message out the nation is sick and tired of having their money stolen and freedom destroyed.

Bring Ammo is a well-known conservative store that provides apparel and other things. But the wrapping paper is undoubtedly a direct statement to the president that freedom of speech is very much alive in America.

Biden’s favorite catchphrase has made its way around the country through media outlets, events, and now wrapping paper. “Let’s Go Brandon” has moved from the questionable swear words to an innocent reminder of how that nation is fed up with the old man ruining their lives. The president continues his push to force vaccinated people or take their jobs away from them. And during the holiday season, his act of war on freedom is an assault on the holiday itself.

Bring Ammo is making a statement with its famous paper. So many people are ordering the paper from the website that it will be a season to remember how a nation played with their president and voiced how his handling of America’s affairs is not what the people are looking for.

Bring Ammo stated in its announcement that “What started as a fun idea for current customers, turned into a nationwide frenzy. The company has sold thousands of pounds of paper that will find its way under trees around the nation. Since launching, the wrapping paper has consumed 3000lbs of raw paper and kept a family-owned Georgia print facility busy around the clock.”

The amount of paper ordered has reached 260,000 sq. ft. Seth Weathers is the founder of Bring Ammo, and he has stated that “Since launching, we’ve printed over 260,000 sq.ft. of Let’s Go Brandon Wrapping Paper. That’s enough to completely cover six NFL football fields. That’s wild.”

The wild media is responsible for creating the much-beloved chant that has swept the country. The reporter covering the NASCAR tried to lie and tell the country that the chants in the background were for the winner of the race. But they were, in fact, a vulgar chant against the president’s policies.

Millions of people are well-loved by the “Let’s Go Brandon” phrase. It has become the rallying cry of all those hurt by the president’s lack of care and service for the country. The president left families behind in Afghanistan and forced millions out of work because of how old man has destroyed the greatness of America.

Even though the phrase has caught on around the country and world, some seem to take offense at its usage. Peloton has moved to ban any usage of the phrase on its systems. They view the phrase as offensive speech and are not compatible with its stance on not promoting any violence or disrespectful terminology towards any person.

The president could learn a few things from those that cannot endorse the phrase. They have not banned the phrase because they approve of his nasty attacks on people, but because they are staying at a level of professionalism of respect for other people.

The Democrats think they can say things about other people without reprisal. But when it is done towards them, they take great offense. But at least a few homes will benefit from the phrase as people unwrap the thoughtfully given presents.