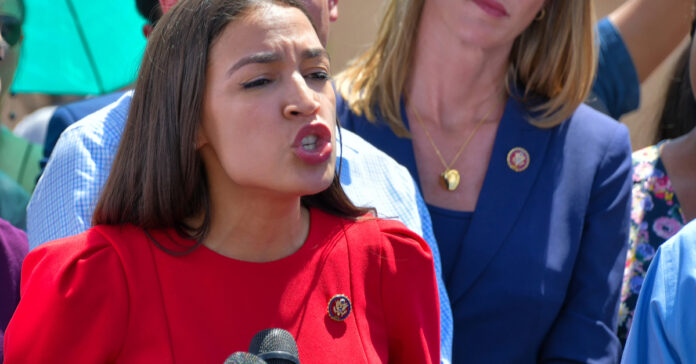 Rep. Lauren Boebert (R-Colo.) launched her reputation on gun rights. She launched her national profile by placing some well-earned jabs at the Texas senatorial candidate Frances Robert “Beto” O’Rourke who was clearly looking to gun grab if he was installed in office.

O’Rourke is again launching another campaign and more fear and trembling is taking place over the potential stripping of Second Amendment Rights instead of gun stripping is happening in the Lone Star State, but that’s a song for another night.

Boebert created a very “on brand” Christmas card that, much like her friend Thomas Massie of Kentucky, showed her family posing with firearms, proudly bearing arms in a photo that not only inflamed the left but caused New York Socialist Alexandria Ocasio-Cortez to swerve a little out of her lane and start spouting about the Bible in response to the hard-core Republicans photo.

AOC took to her platform of choice (a platform that, by the way, has been taken from most Republicans) and talk to her millions of fans about the age-old mantra, WWJD, or what would AOC’s version of Jesus, made of course in her own image, do in the same situation:

Ocasio-Cortez wrote: “Tell me again where Christ said ‘use the commemoration of my birth to flex violent weapons for personal political gain’?” Yes, this is not a joke, AOC has actually dusted off the Bible to try to call out a Republican. She continued, writing, “lol @ all the years Republicans spent on cultural hysteria of society ‘erasing Christmas and it’s meaning’ when they’re doing that fine all on their own.”

Boebert wasn’t having it, though. The fellow congresswoman (who, by the way, is similar in age and instead of tending bar, has been raising a family of four boys) fired back: “@AOC uses her position as a Congresswoman to attack my boys with their Christmas presents. Not a good look, Sandy…”

Boebert and Massie showed support for one another, both drawing heat from the left, both patently unconcerned about the sticks and stones because, let’s be clear, they brought words to an assault weapon’s fight. Both did nothing wrong, both were attacked for showing their support for a clear and crucial constitutional right and both told their attackers what they could do with their opinions about not teaching children how to properly use a firearm.

So, the question before us is this; did Reps Bohbert or Massie do anything wrong with their flaunting of the weapons that they’re legally allowed to procure and use? No, clearly they did not. It’s legally permissible for them to own the firearms, and teach their children to use them. Some would make the argument that teaching your children to use firearms the right way, and the damaging effects it can have if used the wrong way is the only way to keep them from “going off half-cocked” and doing something stupid.

Second, and possibly more importantly; is it somehow anti-Biblical for the families in the above-mentioned photos to be posing with guns or supporting people in using firearms in some legally permissible manner? Again, while the Bible clearly teaches us to turn the other cheek, and treat our neighbors as we want to be treated, on a personal level, it’s written by the same God that told the Israelites to go in and leave NO one alive, not children, not animals, nor anything that draws breath. So we see that there is a clear governmental responsibility to hold accountable those that stand against the God of the Bible to the point of no return.

And lest we all forget; when following the Jesus of the Bible, flipping tables and whipping money changers in the Temple with whips is always on the list of possible ways to emulate His character. And never has the temple seen a more classic “money-changer” than AOC.