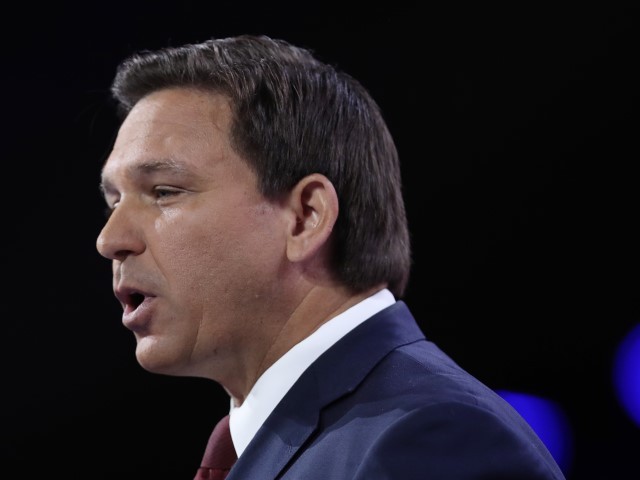 The Republican governor went on offense, introducing the Stop Wrongs to Our Kids and Employees Act (Stop W.O.K.E Act), halting the advancement of the Marxist ideology in Florida schools and places of employment.

“We want all our students to understand why was our country founded. What were some of the key ideas that made us different,” he said, noting the Founding Fathers’ belief that mankind was endowed by our Creator with rights, emphasizing that those rights “do not come from government.”

“I think what you see now with the rise of this woke ideology is an attempt to really delegitimize our history and delegitimize our institutions,” he continued. “And I view the wokeness as cultural Marxism,” he said to applause.

Leftists embracing that ideology seek to alter the very “fabric of our society and culture and things we’ve taken for granted, like the ability of parents to direct the upbringing of their kids,” the governor said, stating that they want to replace it with a “militant form of leftism” and adding that Americans have a responsibility to stand for the truth.

DeSantis briefly walked through some of the instances of CRT being taught in schools across the nation, including the Arizona Department of Education’s toolkit that suggests that babies and toddlers show signs of racism. It is a nationwide problem, he emphasized, explaining that he has a “responsibility in Florida” not to teach CRT, as it violates the Sunshine State’s standards. While the state’s Department of Education approved a proposal effectively banning CRT and content inspired by it in schools, DeSantis said they “need to do more” to make sure those moves carry weight. That is what he hopes the Florida legislature will do with the Stop WOKE Act in the next session.

The legislation would protect employees, teachers and school staff, and ultimately students and families, he announced on Wednesday during a press conference in Wildwood.

Under the legislation, CRT training would be considered an “unlawful employment practice,” making it “clear that corporations and public sector employers violate the Florida Civil Rights Act when they subject their employees to training that espouses race or sex stereotyping or scapegoating including critical race theory.”

It also considers CRT discriminatory in the realm of education, stopping what his office describes as “indoctrination in the guise of professional development, and requires districts and schools to adhere to professional development frameworks consistent with Florida’s lawful and publicly adopted state standards.” The measure would also solidify the Florida Board of Education’s previous actions, making them law “to guard students against indoctrinating curriculum.”

“No taxpayer dollars should be used to teach our kids to hate our country,” he said Wednesday to another round of applause, noting that the legislation would give parents private right of action to enforce prohibition of CRT and to recover attorney’s fees if they prevail.

DeSantis also blasted the left-wing concept of “equity,” noting the term is used by activists to “smuggle in their ideology.” Ultimately, DeSantis said CRT is an “elite-driven phenomenon” and promised that it will not be tolerated in Florida.

Writer and filmmaker Christopher Rufo, who has been at the helm of revealing the extent of CRT training in the federal government, also spoke at the event, and noted that DeSantis is laying down a marker and providing a model for every other state in this battle.