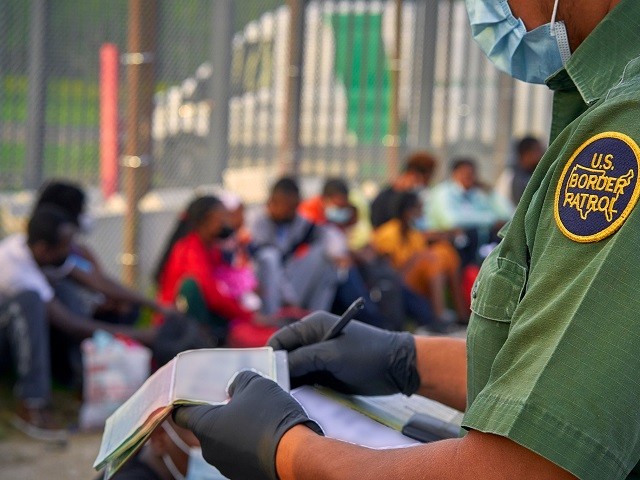 Judge Andrew Oldham for a three-judge panel of the U.S. Court of Appeals for the Fifth Circuit wrote:

DHS claims the power to implement a massive policy reversal–affecting billions of dollars and countless people–simply by typing out a new Word document and posting it on the internet. No input from Congress, no ordinary rulemaking procedures, and no judicial review.

“We address and reject each of the Government’s reviewability arguments and determine that DHS has come nowhere close to shouldering its heavy burden to show that it can make law in a vacuum,” he added.

The Migrant Protection Protocols (MPP), commonly known as “Remain in Mexico,” is a Trump-era immigration policy that requires migrants seeking asylum in the U.S. to wait in Mexico for their U.S. court hearings.

Haitian migrants remain outside a migrant shelter where they await their immigration resolution, in Monterrey, Mexico, on September 26, 2021. (Photo by JULIO CESAR AGUILAR/AFP via Getty Images)

The Fifth Circuit’s Monday decision upholds a federal court ruling from August that held Biden unlawfully ended the MPP and ordered the U.S. Department of Homeland Security (DHS) to renew the program.

After Judge Matthew Kacsmaryk of the U.S. District Court for the Northern District of Texas determined the administration did not give sufficient justification for ending MPP, Mayorkas issued a new memo, once again terminating MPP in October.

However, the Fifth Circuit criticized the administration’s strategy, saying, “The Government cannot use this have-its-cake-and-eat-it-too strategy to moot the case.”

“Once again — the court rejects the Biden’s Administration’s capricious attempts at scraping the ‘Remain in Mexico’ policy. This is a big victory for border security,” Texas Attorney General Ken Paxton said. “I will always hold this lawless administration accountable.”

The Fifth Circuit’s ruling comes during the same week as reports that exposed Biden’s plan to greet border crossers with “European-style reception centers” at the U.S.-Mexico border.