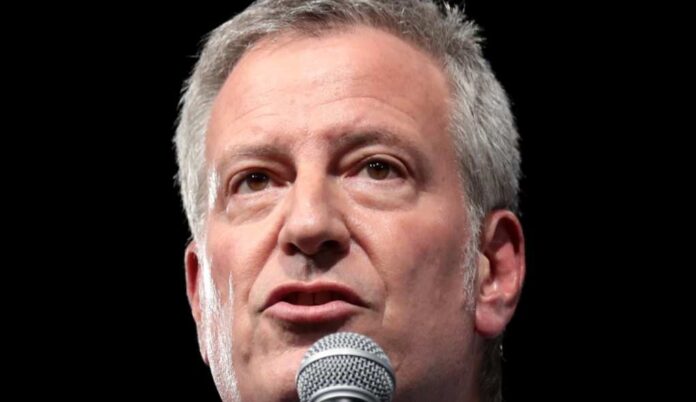 New York City is running amok. Crime rates are up – and even as crime rises, Mayor Bill de Blasio insists that cops are bad news. As he cuts police budgets, he doesn’t see that he’s leaving NYC residents unsafe and vulnerable.

It seems that de Blasio was too quick to show off just how liberal he can be. He had made promises to cut the NYPD budget by $1.5 billion – mainly to appease Black Lives Matter and the other left-wing protesters.

However, there has been more crime – and weekend killings in Times Square. Residents want safety and they want their mayor to do something about it all.

So, de Blasio had no choice but to backpedal…fast. He’s had to increase the NYPD budget by $130 million in April – and he’s about to raise it again because of the need to deploy more officers to the area.

He has no choice. If he wants to open the city back up and enjoy tourism, people demand safety. All it takes is one dead tourist in NYC for thousands to cancel their plans – and take their tourism dollars with them.

Innocent people were killed in the crossfire because de Blasio thought it would boost his reputation to be an anti-cop mayor. He was attempting to be “woke” to show that NYC is the liberal land they claim to be. Whether he was trying to take the title from LA or he simply wanted to be liked is unknown – but he damaged the city with his decisions.

Criminals have to be stopped – and that means that the country needs law enforcement. Our justice system is the largest deterrent that we have. If that goes away, criminals can do whatever they want without fear of repercussion.

Criminal behavior isn’t something that is maintained along racial lines. People of every color can become criminals. So, if a person doesn’t want to experience racial profiling as a criminal, they have a choice. They can choose not to commit crimes. Then, they won’t have to worry about racial profiling or any kind of prison sentencing.

Of course, criminals are behind BLM and the other “defund the police” movements. Why wouldn’t they be? If the police go away, their job got easier. They can run the streets, commit as many car-jackings and murders as they want, and rule the cities.

Yikes. Law-abiding citizens don’t want to see that happen – and that’s where the police come in.

Anyone who has been around long enough remembers the disaster that NYC was in the 1990s. Violent crime was exploding. And it took a Republican by the name of Rudy Giuliani to fix it.

Guess how NYC was fixed? Policing. A stronger police presence turned things around. Property was fixed, criminals learned their lessons, and the city prospered.

Loitering, panhandling, and all sorts of other crimes simply disappeared. Giuliani performed a miracle – and it’s because people were scared to break the law. The police were there to remind people of the consequences.

Mayor de Blasio has to do the same thing. He can’t cut billions from NYPD’s budgets and expect that crime is going to improve. It’s going to do the opposite. The sad thing is that people have had to die for him to learn this lesson.

Now, the anti-cop mayor has had to learn that cops really are what’s going to help. He may have to change the way that he runs the city. We can at least hope that he’s learned his lesson.

Really, though, the only real way to see NYC become the low-crime, prosperous city that it once was is to vote de Blasio out and get a Republican who believes in supporting the NYPD.