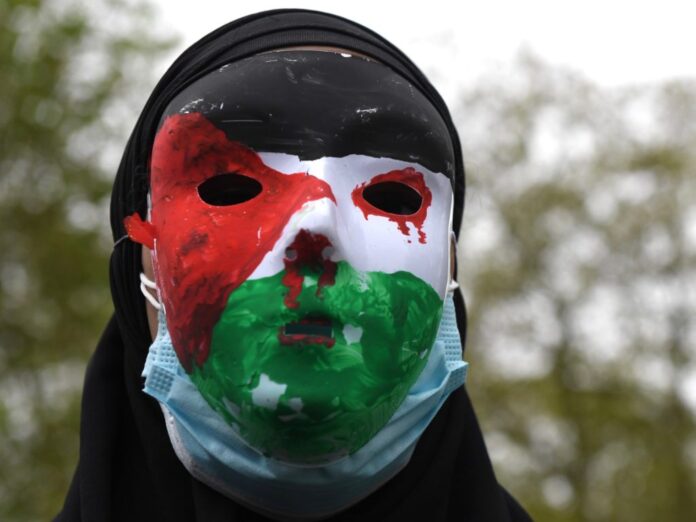 Following multiple police reports from the public, the Met launched a police helicopter to track down the convoy. Four men were arrested on suspicion of racially aggravated public order offences.

The officer in charge of the operation, Superintendent Jo Edwards, said in a statement: “This behaviour was utterly shocking and will not be tolerated. I understand that this would have caused considerable concern within the community and we have arranged extra patrols in the St John’s Wood and Golders Green areas this evening.”

The incidents drew widespread condemnation from the political class in Britain, with Prime Minister Boris Johnson saying: “There is no place for anti-Semitism in our society. Ahead of Shavuot, I stand with Britain’s Jews who should not have to endure the type of shameful racism we have seen today.”

The leader of the opposition Labour Party, Sir Keir Starmer, described the actions as “utterly disgusting,” saying: “Antisemitism, misogyny and hate have no place on our streets or in our society. There must be consequences.”

The Muslim mayor of London, Sadiq Khan, said on Monday: “Unfortunately, whenever there is tension in the Middle East it can spill over to our city, our city is the most diverse city in the world.”

The Pakistani-heritage mayor went on to call for the public to report instances of “race crime” to the police.

The arrests came one day after leftist and Islamic organisations staged a mass protest in London on Saturday. Anti-Israel activists were seen carrying placards comparing the Jewish state to Nazi Germany and chanting that “Israel is a terror state”.

The former leader of the Labour Party, far-left socialist MP Jeremy Corbyn, was a featured speaker at the demonstration. Corbyn called for the United Kingdom to recognise Palestine as a state and said that the British and American governments should cease military co-operation with Israel.

The protest devolved into violence when activists began launching makeshift missiles of bottles, wooden sticks, and at least one brick at police officers who were attempting to disperse the crowds for violating coronavirus restrictions on public gatherings.

As of the time of this publication, Mr Corbyn has failed to condemn either the anti-Semitic abuse on Sunday or the violence on Saturday on his social media.