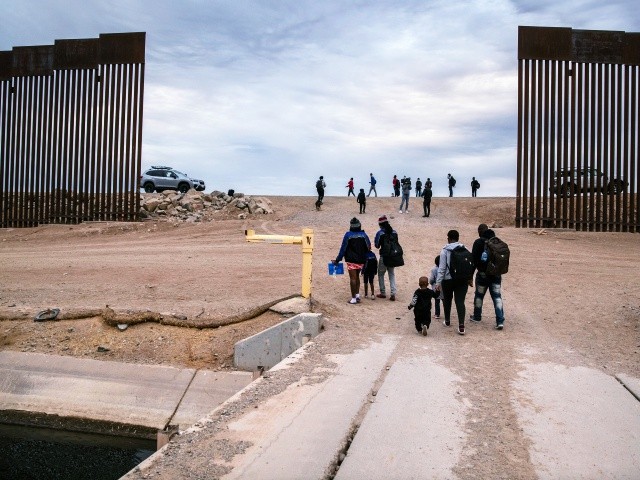 By the end of the month, analysts project that nearly two million illegal aliens will have attempted to cross the southern border since Biden took office — hundreds of thousands of which have been released into the U.S. interior.

The record-setting illegal immigration levels will have outpaced the highest calendar year on record, 1986, when then-President Ronald Reagan passed an amnesty for illegal aliens, by nearly 300,000 encounters.

For perspective, the number of illegal alien encounters along the U.S.-Mexico border this year will have surpassed the resident populations of Phoenix, Arizona; Philadelphia, Pennsylvania; San Antonio, Texas; San Diego, California; and Dallas, Texas, among others.

Biden, in response, has focused his efforts on transforming the southern border into a welcoming checkpoint of sorts where border crossers are stopped, briefly apprehended, and subsequently released into the U.S. interior with the hope that they will later appear at an immigration hearing.

Meanwhile, the administration has spent the year constructing virtually no new border wall to stem the flow of illegal immigration and relieve U.S. Border Patrol agents.

In March, Breitbart News exclusively reported that Biden’s halt to all border wall construction was costing American taxpayers about $6 million a day as materials and construction sites sat idle along the U.S.-Mexico border.

Much of the money previously allocated to construct border wall is now being spent on “environmental restoration.” Most recently, the Biden administration announced that they would use border wall funds on “activities necessary to address life, safety, environmental, and remediation requirements for border barrier projects.”

“The Biden Administration, again and again, refuses to aid Texans battling the border crisis every day,” Paxton said in a statement. “Their response to this crisis is irresponsible, inhumane, and inexcusable. It is time for them to quit hiding behind red tape and help Americans in need.”