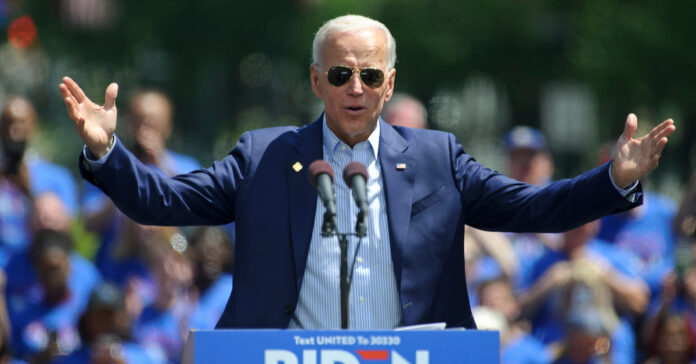 When the chants of ‘F*ck Joe Biden!’ rained down in stadiums and arenas in September of 2021 nobody knew it would become something people would keep chanting everywhere. Then the Sparks 500 race happens, and Kelli Stavest describes it as ‘Let’s Go Brandon!’ so it can make mainstream media, and many Americans have been chanting that instead everywhere they go.

The idea that people would hate President Biden so much that they would chant this even when he isn’t there bothered them enough to lie about the chant in the first place only made them want to chant it even more. This new chant has been shadow-banned on social media, with many noticing drops in performance when using the hashtag; when the shoe is on the other foot, they have recently been doing nothing.

However, one man who claims to be a father has now taken the chant to new highs. While turned in to a live NORAD ‘Santa Tracker’ the man called in to speak with President Biden he dropped the phrase “Merry Christmas, and Let’s Go Brandon” on an unsuspecting President Biden. While many conservatives realize he is going senile, none of us were expecting to hear “Let’s God Brandon!! I Agree” out of Joe Biden’s mouth.

This was a picture-perfect moment as Jill Biden’s mouth just dropped in complete surprise at Joe repeating this phrase. While many could expect her response, you could clearly see that she wanted revenge for this moment. She did not want to see her husband embarrassed this way, and she knows just how weak this makes him look to the American people and on a global scale.

As conservatives are using this as further ammunition that this man is no longer fit to serve the people as the President, the left is using this to proclaim how ‘evil’ and ‘hateful’ conservatives are; despite their people verbally and physically attacking people with anti-Trump rhetoric for 4 years straight. Twitter in response has prevented #LetsGoBrandon from being on their list of trending tweets; despite its ranking significantly higher than many of the other trending tags. However, #Brandon has miraculously been able to slip through the cracks.

Mainstream media has largely ignored this story or simply pushed it down their list of stories so it is left unseen by many others. While people may consider it a ‘right-wing slur’ it would then, therefore, make President Biden some sort of ‘ist’ that they have yet to define; especially since it goes against himself. Perhaps this will be a catalyst for change. While change often comes slowly, it’s possible that this could actually be smart, albeit unintentional, move on Biden’s part.

It’s often said that if you can laugh with the people mocking you it loses its power and perhaps that’s the viewpoint Joe has on the phrase, and he may want to see it go away by agreeing with it. For those of us in the real world though, we all know it will only lead to more people realizing just how mentally unfit, and blissfully unaware he is.

As the left fights with one another to go after this man, there is little doubt he will get some sort of retribution for this joke. People have already been contacting his supposed local government job looking for his head. Others are leaking every bit of information they can find on him to encourage their fellow leftists to take the fight to this man. These attacks will of course get worse, and people will become extreme with them as in 2021 cancel culture wants anyone done away with who disagrees with them. Isn’t that the exact opposite of ‘freedom of speech?’