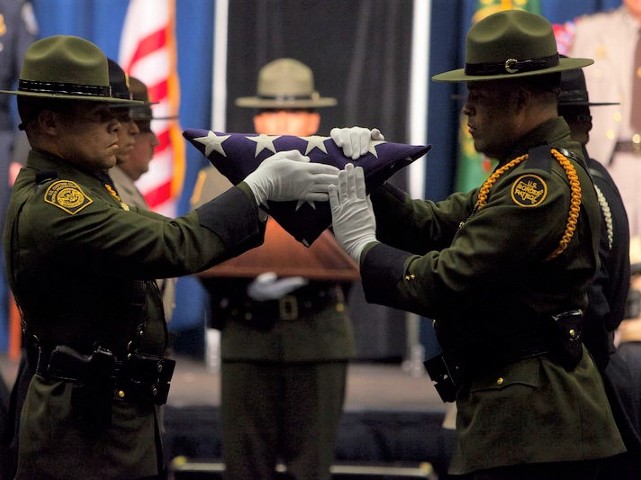 A total of 15 Border Patrol Agents died in the line of duty throughout the year. The leading cause of death for agents during 2021 was COVID-19. Line-of-duty deaths in the Border Patrol increased by 275% compared to 2020.

Of the 15 agents who died in 2021, 13 died in the line of duty as a result of COVID-19. Two were killed in vehicle-related accidents. The record-breaking line-of-duty deaths eclipse the previous record set in 1998 when six Border Patrol agents died while on duty. The combination of a historic migrant surge during a pandemic resulted in severe overcrowding in detention and processing facilities. Most Border Patrol facilities and processing centers routinely exceeded recommended COVID-19 capacity levels throughout the year. Some were in excess of eight times the recommended COVID-19 detention levels.

Although testing for COVID-19 was not mandatory for migrants apprehended along the southwest border, thousands transferred from the Border Patrol to ICE and later released were tested and found to be COVID-19 positive. As of October, according to a law enforcement source, more than 16,000 migrants tested positive and were later released into the United States.

As reported by Breitbart Texas, the Border Patrol relied on non-government organizations to test migrants after their release from detention. Many of those migrants were later released to self-quarantine at hotels within border cities.

Despite the risks, Border Patrol agents were required to process and provide humanitarian care for more thousands of migrants illegally entering the United States daily. This further increased the chance of exposure to COVID-19. The application of an emergency COVID-19 order under the Centers for Disease Control (CDC) authority under Title 42 USC was implemented under the Trump administration to reduce the likelihood of exposure to citizens and those working along the southwest border.

The order allowed Border Patrol agents to swiftly return migrants to Mexico, many in as little as two hours, to avoid the introduction of the virus into the congregate settings. As a result of a federal district court’s order in November 2020 and a loosening of the application of the Title 42 order under the current administration, fewer migrants as a percentage are returned under the order thus contributing to the overcrowding.

In November 2021, according to CBP, only 51% of the 165,783 migrants apprehended by the Border Patrol were returned under the emergency COVID-19 authority. More than 80,000 were allowed into the detention setting in one month alone. In November 2020, while the order was in full effect, 86% of 72,113 migrants apprehended along the southwest border were expelled under the CDC order.

Three Border Patrol agents died of COVID-19 during the month of November 2021 alone.

Agents who died in the line of duty in 2021 include:

Collectively, they served on the southern border for more than 267 years. They leave behind 13 widows, 34 children, and one grandchild.