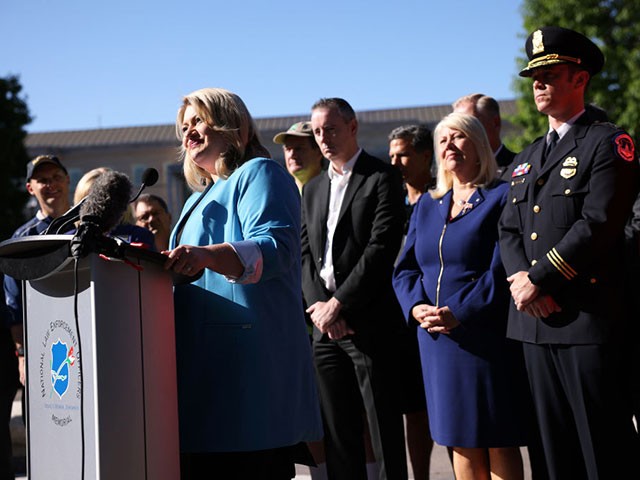 Saturday, during an appearance on FNC’s “Fox News Live,” Rep. Kat Cammack (R-FL) criticized the Biden administration for its policy approach on securing the U.S.-Mexico border and stemming the flow of illegal immigrants across the border.

The Florida GOP lawmaker vowed House Republicans would respond if they took control of the House of Representatives after the 2022 elections.

“This is the ‘Where’s Waldo?’ administration,” she said. “No one can be found. No one wants to take responsibility. You have a border czar in VP Harris, who has done close to nothing to stem the flow. You’ve got Secretary [Alejandro] Mayorkas, who I have personally questioned three times in congressional hearings, who has said that he thinks they’re doing a marvelous job, that the border is secure. Of course, the data that you just showed points to the fact that, no, the border is not secure. And you cannot have a secure nation unless you have secure borders. And if you don’t have secure borders, you’re not a safe, sovereign nation.”

“And so, what we have here is a crisis,” Cammack continued. “It’s a border crisis, as we’ve all seen throughout the year. And what this administration has done is turn every town in America into a border town. Now with regard to the GOP, we have long had a plan to secure, and we have tried multiple times, all of which Nancy Pelosi has stopped and killed on the House floor. She refuses to acknowledge there is a border crisis happening. Her colleagues — they don’t go to the border because they don’t want to see what we all know because it flies in the face of their narrative. Now when we take the House, and by we, I mean the GOP and Republicans, when we rake the House back in November, we will have a plan ready to go come January when the 118th Congress starts. And I think that’s important because we have said that’s necessary to win in the midterms.”

When pressed on what “leverage” Republicans may have over a Democrat-led executive branch, Cammack explained proposed legislation was part of fulfilling a constitutional oath and any action to thwart it would be on President Joe Biden, who she deemed the “trafficker-in-chief.”

“[W]hen we have the majority, we will be passing this legislation, sending it to the President’s desk,” she added. “If he chooses to veto it, then that is on his hands. We know that he is a trafficker-in-chief.”