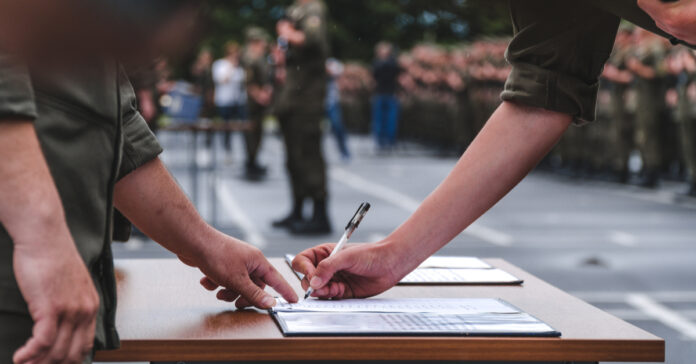 Ever since the very first person in American history willfully signed up for the military, recruiters have been accused of lying. Though they were undoubtedly guilty of shanghaiing a few new recruits back in the day to meet unrealistic quotas and such, these days they’re generally poked fun at in an amusing way. Technology and strict guidelines have made it nearly impossible for military recruiters to pull a fast one over on anyone. They’re also no longer burdened with such unattainable quotas forcing them to fib a little bit, for which they’ll be unfavorably discharged if caught. But this doesn’t mean that what they tell a new recruit can’t still be perceived as a lie, as one recruiter found out.

Braxton Louis Danley, 26, from Luray, Virginia wanted to be a soldier. He wanted to do his part. As is customary for all branches of the military, upon walking into the Army recruiting office in Harrisburg, Danely was administered a pre-test as an indication of how he would score upon taking the required ASVAB test for entry. This tells recruiters where a person’s primary abilities can best be used, or if they can be used at all.

Danley failed the pre-test miserably and became upset when his recruiter told him he wouldn’t administer him the ASVAB until he went home and did some studying from a book he gave him. Even with this, and without studying, Danley repeatedly showed up at the recruiter’s office and was repeatedly denied taking the ASVAB test that he was destined to fail. He figured they’d been lying to him and didn’t like him for some reason so they just didn’t want him in the Army. You know how recruiters do.

Danley finally quit showing his face at the office but this doesn’t mean he was done with his main recruiter who has only been identified by the initials “J.J.” in court documents. Danley began making harassing phone calls, sending threatening text messages, and filling up the recruiter’s official Army email.

Prior to sending his first nasty email, Danley had called a different recruiter to tell him that the Army should come to his house and arrest him because he was very angry. Of course, this wasn’t done. Danley’s email read, “I remember everything you pricks done to me so time to settle the score.” This was the first of many to follow, and they only became worse.

Fireworks exploded in Danley’s head when J.J. contacted local authorities for a restraining order against him. Danley was not only barred from entering the recruiting station, but he was also no longer allowed to continue any form of communication with the station or J.J.

The order didn’t stop him. Danely sent a text message to J.J.s official cell phone only two weeks later. “So that’s how it is now you f*ck my goddamn record up. Now I can’t get a job anywhere ok you want to play.” Since Danley had never officially enlisted in the Army, he had no Army record to prevent him from gaining employment.

J.J. ignored the message which only infuriated Danley more. He sent text messages non-stop for a week straight without a break, forcing J.J. to have to get a new official cellphone number.

Since Danely had already been blocked from J.J.s personal FB account, he signed on to one of his parent’s accounts and slam dunked J.J. with messages. One of which read, “Can’t understand why you f*cked me over in that test guess cause I look like a [sic] druggy right?… I try to fix my life and you f*cked it now [sic] im hunted by your people f*ck you none of you will walk away if you serve papers on me…a fight is here now face me.”

As might be imagined, Danley is now in court. His attorney is arguing that he’s too mentally unstable to stand trial but his recruiter isn’t standing for it. So Danley was his wish. The fight is here and now and he’s being faced.

If determined guilty Danely could receive up to five years in the pokey, and hopefully, some extensive therapy.