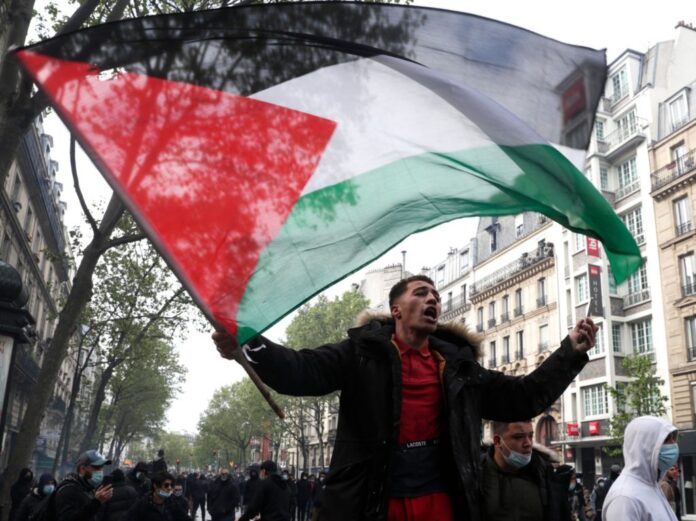 Around 1,500 to 2,000 people took part in a pro-Palestine rally in Lille after a call to protest was issued by the France-Palestine Solidarite organisation.

An investigation was launched after a banner was spotted at the event with the caption “Israel = Terrorist State” and showed a picture of an Israeli flag with the Star of David cut out alongside the swastika used by Adolf Hitler’s National Socialist Party (NDSAP), La Voix du Nord reports.

The prefect of the region of Hauts-de-France and the North later took to social media to announce that an investigation would be conducted to determine if the banner violated the French criminal code.

The incident is just the latest allusion to the National Socialist regime by pro-Palestinian activists and supporters.

On Monday, a “freelance contributor at CNN” from Pakistan named Adeel Raja was dropped by the broadcaster after appearing to praise Adolf Hitler and making other allegedly antisemitic social media posts referring to the ongoing conflict in Israel.

While Raja removed the Sunday tweet, it was found that he had made multiple posts praising Adolf Hitler since at least 2014, several months after his first articles written for CNN.

In the United Kingdom over the weekend, a video spread across social media showing a convoy of cars waving Palestinian flags screaming antisemitic abuse, including call to rape the daughters of “the Jews”. Four men were later arrested by police in connection with the incident.

Germany, meanwhile, saw multiple cases of Israeli flags being burned. At least one synagogue was attacked in the city of Bonn, while a memorial to a synagogue destroyed by the National Socialist regime in 1938 was set on fire in Dusseldorf.