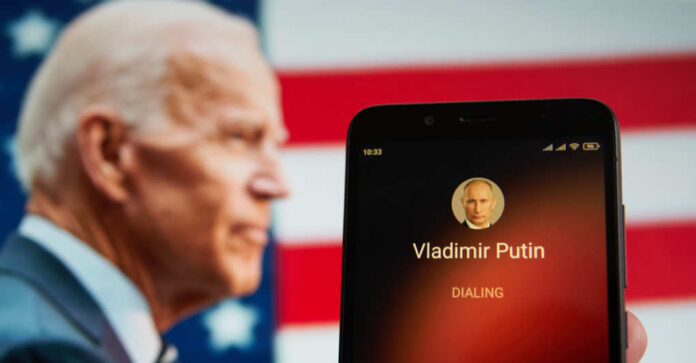 It’s no big secret how Joe Biden and Vladimir Putin aren’t the best of friends. They never have liked each other. To Putin, Biden is Barak Obama in disguise, only more disengaged with reality. To Biden, Putin’s a pain in his tushie who keeps disturbing his naptime. But the guys have agreed to at least talk for a second time concerning Russia’s impending move to obliterate every plant, tree, house, animal, and person in Ukraine. Here’s hoping it goes better than the first call did.

The White House said Biden intends on letting Putin know that the trouble between Russia and Ukraine can still be solved diplomatically. As an indication of how Putin doesn’t share Biden’s sentiment, he’s still piling troops on top of the 100,000 who are already at the Russia/Ukraine border waiting for the flag to drop.

Putin’s being a bully on a playground. Russia is demanding that Ukraine not be allowed to join NATO, ever, and that the entire alliance keeps their cotton-picking selves out of there, especially inclusive of the US. If they don’t get their way they’ll simply level Ukraine so it’s of no use to anyone.

With what little gusto he has remaining Biden plans on sharing some fatherly wisdom with Putin. A senior administration official said the prez would approach Putin from “a context of de-escalation rather than escalation.” Biden plans on letting him know how this is the only possible way to achieve “real progress.”

For now, it’s just a tug-of-war between the two, but there’s a lot riding on who gets pulled over the line first. Some political experts believe WWIII hinges on whether the two meatheads can work their disagreements out in a civil manner for the sake of humankind as it now exists.

Surprisingly, it was Putin who requested the second call. Kremlin spokesperson Dmitry Peskov said, “The goal of the conversation is clear – to continue discussing the issues that were on the agenda during the recent conversation via video conference.”

Of course, Peskov was referring to the Russian troop buildup that has NATO on high alert and fully prepared to respond militarily in an instant, which would also drag the US into a brand spanking new war while still trying to recover from the last one. Not a good time for this, Putin. But we’re certain you’re aware.

It’s difficult to say if Russia is calling a bluff no one wants to take but based on Peskov’s next statement it at least appears for now that their threats may remain idle. “From our point of view, from the point of view of President Putin, the need has arisen for another telephone conversation, which would preface upcoming talks.” Talks, talks, talks…

But if talking is all Putin has in mind, he’s sure gone about it in an expensive way. Transporting hundreds of thousands of troops, equipment, supplies, and so forth to the border hasn’t come without a high cost. Plus the fact that more troops are being deployed there every day should indicate his seriousness.

Whatever Putin’s far-reaching plans are, Joe Biden would be well advised to eat some healthy brain food and pop a few Flinstones before he picks up the receiver. If not, he could very well be the spark that lights the fuse.