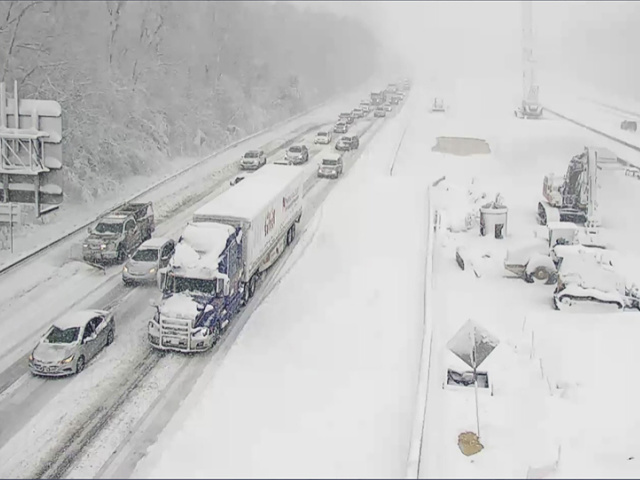 Harris claimed, “America is moving again” because of the $1.2 trillion infrastructure law that President Joe Biden only signed into law in the final weeks of 2021 after deliberately dealing the bill to use it as leverage in a failed effort to pass his larger social spending bill, the “Build Back Better” bill, which originally weighed in at $3.5 trillion and may cost much more.

Northern Virginia was hit by a snowstorm that resulted in over a foot of snow on the ground and a highway deadlock. Virginia’s Department of Transportation (VDOT) acknowledged the unprecedented situation and affirmed its commitment to clear the highway:

We know many travelers have been stuck on Interstate 95 in our region for extraordinary periods of time over the past 24 hours, in some cases since Monday morning. This is unprecedented, and we continue to steadily move stopped trucks to make progress toward restoring lanes.

The last drivers were reportedly rescued by emergency crews Tuesday afternoon after spending over 24 hours stranded in the snowstorm. Notably, U.S. Sen. Tim Kaine (D-VA) was stuck on the highway for 27 hours.

Kaine provided live updates on Twitter as he was stuck on the highway. “I started my normal 2 hour drive to DC at 1pm yesterday,” he said. “19 hours later, I’m still not near the Capitol. My office is in touch with @VaDOT to see how we can help other Virginians in this situation. Please stay safe everyone.”

“After 27+ hours on the road from Richmond to DC, @timkaine is safely back in the Capitol. Still in good spirits,” his communications director tweeted.

While Sen. Kaine and hundreds of drivers were stuck on Virginia’s highways, Harris tweeted, “Because of the Bipartisan Infrastructure Law, America is moving again. That’s what infrastructure is all about: getting people moving.”

Twitter users took the opportunity to call out the vice president for her tone-deaf tweet while drivers were stuck on the Virginia highway.

“Great success,” Eric Matheny sarcastically responded while attaching a photo showing dozens of cars at a standstill on I-95.

“Why, why oh why would anyone think this tweet is a good idea at the same time I-95 is trending for a 12 hour+ 30-50 mile standstill? Are you guys *trying* to write GOP midterm attack ads for them?” one user questioned.

“Not a yard of new track has been laid, not an inch of new road paved, and drivers were stuck on the highway in Virginia overnight. But… ‘America is moving!’ Thanks to Infrastructure,” said Breitbart News’s Joel Pollak.

“Imagine being stuck on I-95 and reading this tweet,” one user added. Political commentator Stephen L. Miller called attention to Harris’s lack of political acumen. “There’s that impeccable political acumen and timing, from the candidate who dropped out before Iowa, we’ve all come to love and know,” Miller said.