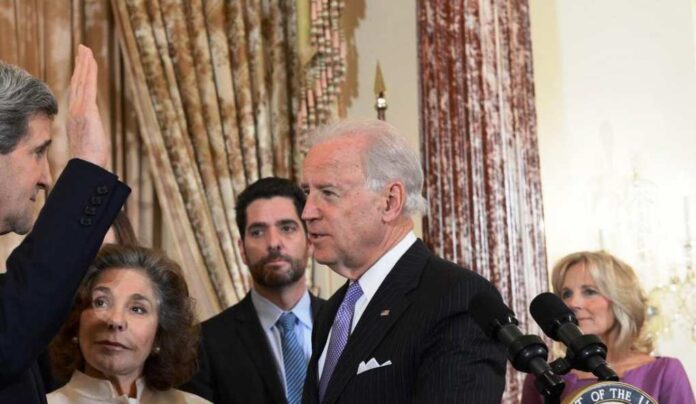 While Democratic President Joe Biden isn’t necessarily hiding in the basement any longer, he isn’t strictly allowed to be out in public or in front of a microphone for very long. And when I say he’s not “allowed,” I mean just that.

For the second week in a row, Biden has made comments about him getting “in trouble” or “not supposed” to be talking to reporters and taking questions from them.

As he told the White House press pool on Wednesday, “You guys are bad. I’m not supposed to be answering all these questions. I’m supposed to leave, but I can’t resist your questions.”

He actually walked away from the podium just before this but appeared to change his mind and returned to field more questions.

Last week, he did nearly precisely the same thing. He walked away from the podium and then returned, saying, “I’m sorry. This is the last question I’ll take. I’m really gonna be in trouble.”

And while he has said both in a joking manner and with a smile, we aren’t really so sure that he’s not serious. I mean, otherwise, why would he say it more than once and at more than one location or event?

Besides, White House Press Secretary Jen Psaki has pretty much confirmed that he has been told on numerous occasions not to speak to reporters.

Last week, Psaki told David Axelrod’s podcast that Biden has a bad habit of taking far too many questions from reporters. It’s something that apparently happens “nearly every day,” and it’s not at all “something we recommend.”

And if that wasn’t bad enough, she admitted that “In fact, a lot of times we say, ‘Don’t take questions.’ But he’s going to do what he wants to do because he’s the president of the United States.”

Now, as some would be inclined to say, this could be a case of mere professional respect. Biden has a staff and an entire department with the sole purpose of handling communications and helping the president and his administration to be seen in the best light possible. And they all know he has a penchant for making some rather egregious mistakes in front of the camera.

They, like any adviser, could simply be warning him of speaking too much and giving gaffes a bigger opportunity to be made. And he, as a man willing to listen to that advice, is simply respecting their ideas.

However, there seems to be a lot more going on than just some advice given and taken.

Take, for instance, the fact that he has literally been pulled away from the microphone and camera by staff members on more than one occurrence.

Or what about that time when his communications team cut off his live feed right after Biden announced he would be taking questions.

And, of course, we can’t forget about all the times that the official transcripts have been changed to fit a more cohesive and less blunder-filled speech from our commander-in-chief. Biden’s even given press conferences in which he has written on cheat cards what topics he is allowed to discuss and which reporters he is allowed to call on.

And just this week, it was reported by Politico that the Biden Administration has a policy in place in which interviews with staff members or administration officials can only be conducted if the reporter doing the interviewing has agreed to send quotes from the interview for approval before being published.

Talk about a lack of transparency…

At this point, I’d say Biden isn’t kidding at all about not being allowed to talk to the press. Now, of course, I don’t think he exactly gets “in trouble” for doing so. I mean, what are they going to do to the President of the United States, especially since he’s a feeble, old man?

Nevertheless, they, as in Biden’s liberal staff, are clearly trying to control every move he makes, every word he utters, and everything even remotely related to the White House. I don’t know how they can deny it when Biden is telling everyone that.