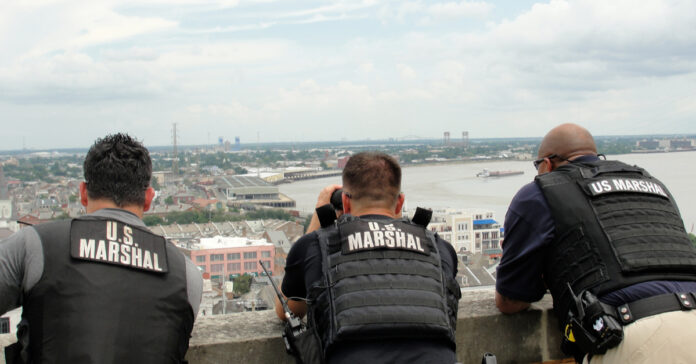 The United States Marshals Service (USMS) is the oldest federal law enforcement agency in America. It has recently reported a massive number of fugitive apprehensions in the fiscal year of 2021. The USMS has arrested 84,247 fugitives this year which is three times more than the arrests they made in 2020. Of those 84,247 arrests by the USMS, more than 10,000 of them we people accused of sex offenses, and 6,000 of them were homicide suspects.

Deputy Attorney General Lisa Ol Monaco said recently in a press release that the outstanding work of the U.S. Marshals Service shows that the Department of Justice has no higher priority than keeping our communities safe.

“At a time of unprecedented challenges posed by a global pandemic, the U.S. Marshals continue to deliver on their mission, tracking down and arresting more than 84,000 fugitives. The Department of Justice, through our law enforcement components like the U.S. Marshals Service, will continue to prioritize our efforts to reduce violent crime and keep our neighborhoods safe,” Monaco said in her statement.

In October of 2021, the USMS nabbed a fugitive who was on the “15 Most Wanted” list. Jory Worthen, from Arkansas, was accused of murdering his girlfriend and 4-year-old son in June of 2019. The investigation by the Marshals led them to Burbank, California. They were able to locate Worthen there and arrest him after a short foot pursuit, according to the DOJ.

After his arrest in October, Worthen was extradited to Arkansas. He eventually accepted a plea deal that includes never being eligible for parole. He pleaded guilty to two counts of first-degree murder as part of the deal. He will now serve two concurrent life sentences.

The 15 Most Wanted Fugitive Program was established by the USMS in 1983. Their goal was to prioritize the investigation and apprehension of high-profile offenders. They go after those who are considered to be some of the country’s most dangerous fugitives. These are usually career criminals with histories of violence, and they pose a huge threat to public safety.

Why has there been three times the number of arrests this year as opposed to last year? Some maintain that it follows the trend of rising crime across the United States. It has been reported by some news agencies that Chicago has recorded 797 homicides in 2021, 25 more than 2020, and 299 more than 2019.

The USMS caught 6,240 gang members and 1,239 foreign fugitives according to the Department of Justice. They issued 99,000 warrants that were cleared by law enforcement agencies. Out of those, 64,565 were state and local warrants and 35,042 were federal warrants. The Department of Justice explained that the number of warrants cleared almost always is higher than the number of arrests in a given year. One fugitive may be wanted on a number of warrants, so when that person is arrested, several warrants may be cleared.

Ronald Davis, the director of the U.S. Marshals Service, said, “I want to thank the men and women of the U.S. Marshals Service for their continued commitment and dedication to public safety. Their steadfast courage and selfless service in bringing fugitives to justice and in protecting our judicial process help to make all of our communities safer and is critical in preserving our democracy.”