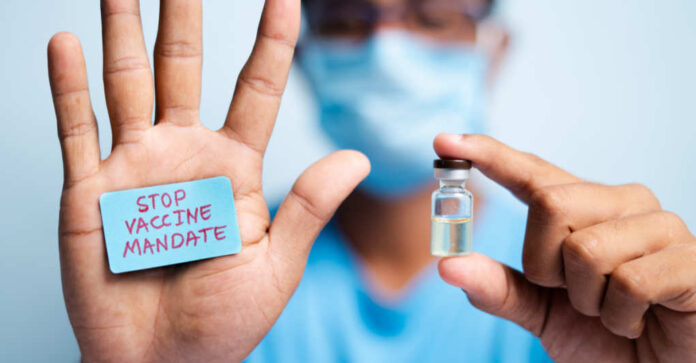 Joe Biden cannot seem to catch a break with any of his executive orders. The old man thinks that he can bypass Congress and issue laws that affect how the country operates. Biden is the one president that has abused his executive powers so much that no other president in history has ever issued as many orders as his office has done. And now that it is clear that the president wants to assume full authority over everything, the people are fighting back and taking him to court with an alarming success rate.

Biden thinks that he can order people to mask up and force them all to vaccinate with a mere stroke of his pen. However, the problem is that he has failed to check and see if the Constitution permits the order he is issuing. His orders take a right to choose away from people, which is a clear violation of people’s Constitutional rights for being an American.

The more he treads on that freedom, the more the old man is going to find himself struggling to win in court. The Texas Attorney General is Ken Paxton, and he has been one to stand in the way and fight back against the president’s illegal actions.

Paxton was the one to give the good news regarding Biden’s recent loss in yet another court case against his vaccine mandate. Biden wanted to enforce a mask mandate and vaccine mandate on little kids part of the Head Start Program. Biden must think that he can win against little kids since he loses with the adults. Those little kids have parents, and they will fight for them.

Paxton stated in full that “Thanks to my suit (first of its kind in the nation), (President Biden) is barred from using the Head Start Program to force vaccines and masks in Texas—both of which this administration embarrassingly admitted don’t stop Covid anyway! HAPPY NEW YEAR!”

The Texas Attorney General filed the lawsuit on behalf of the Head Start Program. And was successful in keeping the mandates from taking effect.

Judge James “Wesley” Hendrix is the federal judge that nixed the mandates. The Lubbock Independent School District proved that the mask mandate and vaccine mandate would harm the Hear Start program that helps infants and toddlers get ready for school. The program is operated so low-income families can get the support they need to see that their kids get an education.

The federal court stated that “The agency’s rule requires Head Start staff to be vaccinated and near-universal masking of children and adults. It is undisputed that an agency cannot act without congressional authorization. Thus, the question here is whether Congress authorized HHS to impose these requirements.”

The Democrats have long sought to strip away the parent’s right to choose what is best for their children. They know that if they can undermine the family and parental rights, they can, in effect, indoctrinate every child with their demonic doctrines and pollute the child so much that they cannot help but vote and support the immoral actions and decisions of the Democratic Party.

Parents have the right to choose what is best for their kids, not because a government or court says they do. They have the right because they are the protectors and providers of all the kids in their care. And there is not an entity around that knows what is best for each child than the parent does. The Democrats may act as they care about kids, but seeing how Biden treats migrant children causes people to see just how much the liberals hate children.

The judge found that the Biden mandates failed to follow the Administrative Procedure Act. They are not a part of it. So, they cannot be pushed or forced on people. The entire issues go right back to the point that the president does not have the right to order people to do things that they should decide for themselves.