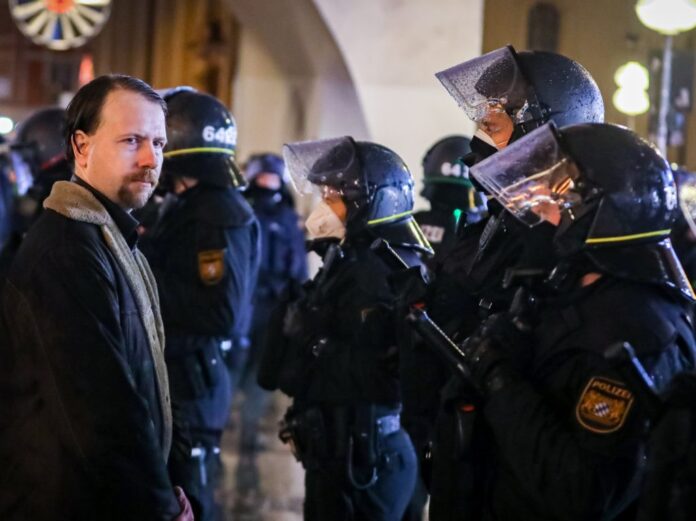 Germans have once again taken to the streets on Saturday in protest of various lockdown measures in Germany, including the proposed compulsory vaccination measures now due to be debated in mid-February.

One protest in Hamburg, in particular, is reported to have broken attendance expectations, the rally occurring shortly after the city banned untested and unboosted patrons from restaurants earlier in the week.

According to a report by Der Spiegel, 13,700 are estimated to have attended demonstrations in Hamburg, despite it being estimated that 11,000 would turn up.

Protesters are reported to have gathered under the motto “Das Mass ist voll. H?nde weg von unseren Kindern”, roughly translating idiomatically to “This is the last straw. Hands off our children”.

A preliminary investigation into suspected sedition has also been launched by authorities, after one participant was spotted wearing a Star of David with the word “unvaccinated” on it.

Germany’s various constitution protection authorities nationwide are also keeping an eye on protests for possible “anti-democratic and security-endangering delegitimization of the state”, according to Die Welt, though authorities in Hamburg have reportedly not found evidence that extremists are at the centre of events.

“In Hamburg, the majority of the protest is not yet extremist,” admitted the Hamburg Office for the Protection of the Constitution. “We see right-wing extremists and citizens of the Reich [who reject the legitimacy of the Federal Republic of Germany] as followers, but so far they have not had a controlling or formative effect.”

Several thousand people also gathered in Magdeburg, D?sseldorf, Freiburg as well as a host of other locations across Germany, in order to protest lockdown measures.

Germany, under the nation’s new traffic-light coalition, is looking at the possibility of implementing a vaccination mandate in a similar vein to the one promised by the Austrian government last year.

However, despite many politicians — including Germany’s Chancellor, Olaf Scholz — being in favour of the measure, proceedings on its implementation have come into some difficulty.

While the nation initially hoped to have the measure implemented in early February or March, according to a report by AFP, delays in the writing process have meant that politicians are now only scheduled to have the first draft of any measure proposed by mid-February.

As a result, one report suggests that the measure could not be implemented in Germany before the beginning of May, at the very earliest.

Politicians meanwhile will supposedly be able to vote on the measure when it eventually reaches the Bundestag in a way that aligns with their own personal conscience, according to AFP, with no party in the parliament looking to enforce an official position on the measure.

However, should a mandate pass the German legislature, those who remain unjabbed in the country may face a similar situation as those in neighbouring Austria, where unvaccinated individuals are looking at the possibility of hefty fines, and even possible imprisonment, once a mandate comes into effect.