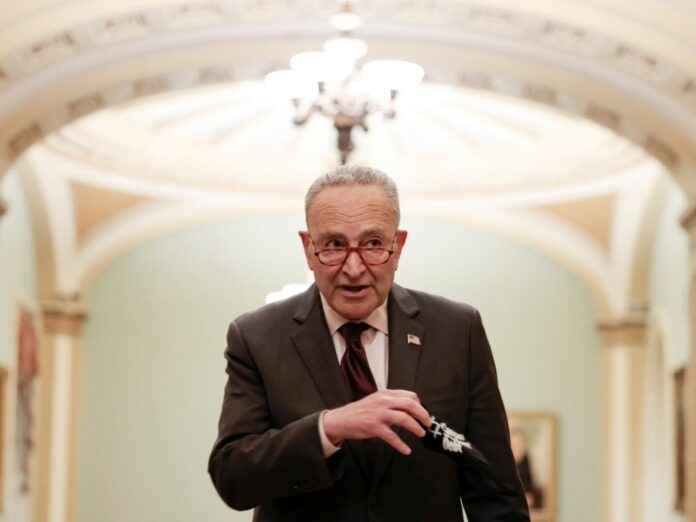 Schumer has pledged the Senate will vote this week on changes to Congress’ upper chamber rule on the filibuster, the Senate’s standard that helps make the chamber the “world’s greatest deliberative body.”

However, Schumer, who has a one-member majority in the Senate, needs to convince Sens. Joe Manchin (D-WV) and Kyrsten Sinema (D-AZ) to change the Senate’s rules, which the two moderates have been reluctant to do.

Sens. Tim Kaine (D-VA), Jon Tester (D-MT), Angus King (I-ME) have tried to lobby Manchin, but it remains hard to persuade the West Virginia Democrat when they have yet to coalesce around a single filibuster reform idea.

“Different people have various differing ideas about what kind of reform there should be. We’re trying to come to a consensus,” Sen. Richard Blumenthal (D-CT).

Politico noted that there are three ideas that Democrats could explore to reform the filibuster.

The Senate needs 60 votes to “invoke cloture” to end debate on most bills and proceed to a floor vote on the bill, which only requires a simple majority or 51 votes to pass.

Reviving the talking filibuster would require that senators continue talking to avoid ending debate on the legislation.

Manchin said in March 2021, that he was open to making the filibuster a “little bit more painful” for the minority and that he might be willing to make senators “stand there and talk” if they wanted to maintain the filibuster.

This might signal he could support the talking filibuster.

Sen. Kevin Cramer (R-ND) said regarding the talking filibuster, “It still doesn’t really accomplish the recent tradition of the filibuster to protect the rights of the minority. It just lengthens the process.”

The Senate rules require 60 votes to begin debate on a bill. Democrats could reduce the threshold to 50 votes, and could even be paired with the talking filibuster.

Carveouts for Voting Rights and Other Exemptions

Schumer could pass one-time exemption to the filibuster rule for voting rights legislation. Although, Manchin and Sinema have already signaled against this exemption.

Although Republicans have railed against Schumer’s efforts to reform the filibuster, Senate Minority Leader Mitch McConnell (R-KY) cut a deal with Schumer to cut a one-time filibuster deal to raise the debt ceiling by bypassing the filibuster.

Sen. Mike Lee (R-UT) and conservatives railed against the one-time carveout. Lee told Breitbart News that the Senate would essentially “cease to exist.”

Mitch McConnell, the Broken Old Crow, has just conceded, for absolutely nothing and for no reason, the powerful Debt Ceiling negotiating block, which was the Republicans’ first-class ticket for victory over the Democrats.

Trump added, “He was afraid to play that card even though, without question, they would have completely FOLDED on the Build Back Worse Bill, which will destroy the fabric of our Country and virtually anything else that the Republicans wanted.”