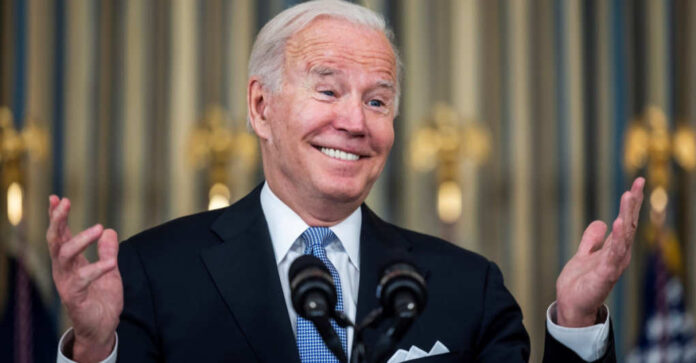 President Joe Biden has so much free time on his hands that he cannot help himself but take one vacation after another. His pathetic administration and media entourage keep telling the public that Biden is so busy that he does not have time to deal with simple matters. And yet when people look at how much time the man spends on vacation in his first year, they cannot help but think they are being lied to.

The New York Post reported that the president had spent 27 percent of his time at his home in Delaware. He sits at home instead of sitting in his Oval Office rocking chair.

Psaki went on to say, according to RedState that “I know the president doesn’t have public events today. He does have a number of meetings with policy teams and that’s often what he’s doing behind the scenes. If he were standing here today — which I know he’s always invited, is what you guys will say, but he would say we never give him any free time or any time to think. And that is probably true.”

The truth is that the president never thinks things through before acting on them. He never once thought about the consequences once he did away with the southern border treaty with Mexico. He never once thought about inflation or higher gas prices when he killed off American oil and blocked supply lines in the Pacific. The man does not think at all.

The nation sits in crisis on multiple fronts, and the president is off vacationing at undisclosed locations. And it is the American taxpayer that is paying for his travel expenses. The old man is old and does not care about his pointless decisions to the younger generations. All he cares about is what he gets out of it in the end.

RedState ran across another posting from the Pulse that stated the same thing. They reported that “By October 2021, Biden had sought refuge in Delaware at least 25 times. Only on one vacation did he take time away from relaxing to do his job, when he visited Dover Air Force Base for the homecoming of the 11 service members killed in a suicide bomb attack in Kabul, Afghanistan. The service members were murdered in the terror attack during Biden’s failed exit from Afghanistan and Biden was mostly noted for repeatedly checking his watch that day, for when he could leave.”

Biden thinks the Oval Office is a regular job to punish his timecard and leave for the day. But the president’s office is a life’s job that will demand his presence at all hours of the day. And if there is a crisis, the president is not supposed to take a vacation until everything is solved.

But Joe Biden clocks out at the end of the day and takes his mini-vacations to his home in Delaware. He sits in seclusion while Americans at the southern border are harassed and threatened by illegals every day. Law enforcement continues to find kids dropped over the border to fend for themselves. And Biden simply sits and looks the other way.

Biden would rather walk his dog than take a trip on a plane to hurting areas of the country and help out. Donald Trump was consistently traveling to destroyed areas of the country after natural disasters and helping to restore communities one brick at a time. But Biden would rather play shuffleboard than get his hands dirty helping someone other than himself. And his five decades in politics prove that he has been at helping people.