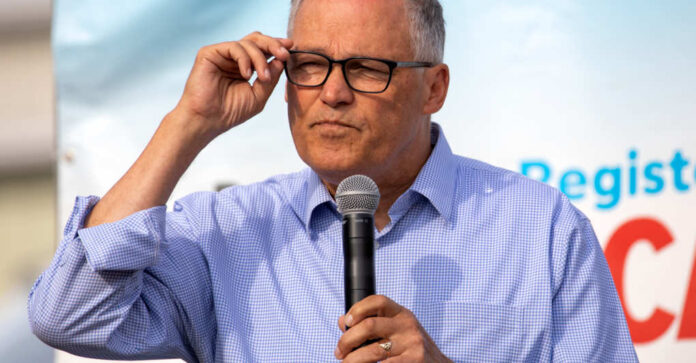 We all know that lying is a sin, and, as such, it should be frowned upon and avoided at all costs. But should it be made illegal?

That is the question being considered by Washington State legislators at the moment, as Democratic Governor Jay Inslee has recently proposed such a law.

To be clear, Inslee isn’t implying that all lies will be outlawed. I mean, lying in its entirety can’t exactly be criminalized, can it? As great as it would be for society, how would you even go about enforcing such a thing or proving that it happened? It’s impractical, to say the very least.

So instead, Inslee’s plans are to really just criminalize any lies made regarding the declared outcomes of elections.

This, of course, is his rather uncalculated plan to make sure that former President Donald J. Trump is never allowed to run for office again. Like many among the political left, Inslee fully believes that Trump has continued to spread lies about who really won the 2020 presidential election and, therefore, which our rightful president should be. In addition, he believes those lies incited the January 6 Capitol incursion last year.

And so on Thursday, on the first anniversary of that fateful day, Inslee made sure to join in the throng of progressive voices declaring Trump to be guilty of crimes and “a continuing coup” that endanger our electoral system, both federally and on a state level.

According to The Seattle Times, Inslee spoke at the state’s capital of Olympia, declaring that Trump is “still intent on continuing this coup effort.” So he’s going to make an equal effort to ban “lies about election results by elected officials or candidates for office.”

As Inslee said, “It should not be legal in the state of Washington for elected officials or candidates for office to willfully lie about these election results.”

Inslee explained that, if passed, such lies would be classified as a gross misdemeanor. They could award someone a fine of up to $5,000 as well as no more than 364 days in jail.

But what exactly constitutes such a lie? I mean, lies aren’t always all that easy to prove, let alone be classified as a gross misdemeanor.

Well, according to Inslee, how you can tell if it is such a lie punishable by Washington State law will be “knowledge that there’s potential to create violence.”

Now, to be clear, this is not the first time Washington has tried to pass such a law. Back in 2007, in fact, a similar proposition was put forward, with lies about political opponents by candidates being made illegal. However, it was rejected with a 5-4 decision by the state’s Supreme Court as nothing more than a “censorship scheme.”

According to former Justice James Johnson, the government should never be the “final arbiter of truth,” especially in a political debate, as that would be in direct opposition to the First Amendment.

Inslee believes his little clause about the “potential” for violence creates just enough of a caveat to avoid running into the same results.

For starters, he argues that such a statement about election result lies would essentially be moot, and not just because its definition is questionable. Turley explained that at any point, “any prosecutor could allege” that any election fraud claim was inciting violence. And so, the claim of election fraud in and of itself would eventually be treated as incitement.

He continued, saying that basically criminalizing election fraud claims would be so “nonsensical” that it would only be a greater “threat to free speech.” And he’s not wrong. Essentially it would make it against the law to question both the election system and our government, which our founding fathers made sure was important to the process of democracy. As Turley wrote, it would be “dangerously and flagrantly unconstitutional.”

But that, of course, isn’t going to stop Inslee and his ilk from trying to get it passed anyway. In fact, rumor has it that the bill is being drafted as we speak. We can only hope that democracy wins out at the end of the day and that the legislation is left to die a miserable death. Perhaps, if we are lucky, Inslee’s career will shortly follow.