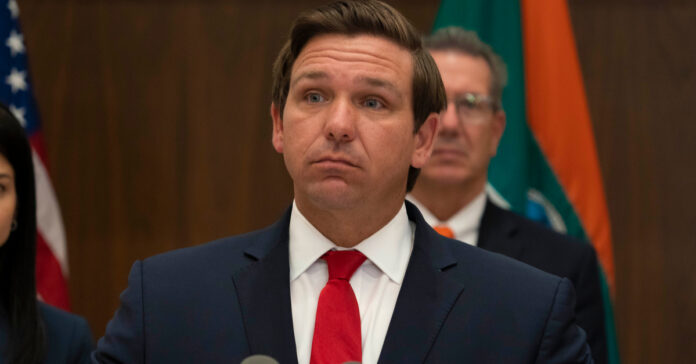 If you can believe it, Jen Psaki, Whitehouse Press Secretary giving a verbal beating to Florida Gov. Ron DeSantis once again, however, this time she’s making false claims accusing DeSantis of not recommending his citizens get the COVID-19 vaccine as well as the variety of booster to go along with it.

While speaking at the daily White House press briefing a reporter asked Psaki about DeSantis’ plan to distribute 1 Million at-home testing kits. DeSantis has been very outspoken about his disappointment in the Biden administration making promises to make at-home COVID-19 testing kits readily available to help fight the winter surge.

Psaki was asked by the reporter how she felt about the critiques DeSantis has recently made concerning the idea that we need to quit testing healthy, Asymptomatic people and conserve our testing kits for the more vulnerable population such as those in long term care facilities, nursing homes, and those within the senior communities.

“We have taken several steps to provide tests at a much larger, expansive capacity than that to vulnerable communities across the country. That has been part of the president’s effort to quadruple our testing capacity,” Psaki said, noting that the administration has worked to provide 5 million tests to communities “that need help the most.”

While responding to the reporter, Psaki accused DeSantis of not advising his citizens to get the COVID-19 vaccines.

“I would say it’s pretty rich coming from Gov. DeSantis, given he is somebody who has been not exactly advocating for people in his state to get vaccinated, which we know is the way people can be protected, [the] way that lives can be saved,” she added. “And if he wants to be a constructive part of this process then perhaps he should encourage what scientists say is the best way to save lives, prevent and reduce hospitalization, and that is getting vaccinated and getting boosted.”

It’s too bad we aren’t all held to the same standards as the liberals, because it was nice to be a 5 yr old, where people never held you accountable for any sort of ridiculously false information you decided to peddle.

When people just nodded and smiled because you were 5. That’s how people treat the liberals and it is starting to feel a lot like we’re in the twilight zone.

While DeSantis believes that as Americans we should be able to choose whether or not we wish to receive a COVID vaccine he has remained a front runner for those pushing the vaccine as well, saying that over 95% of the people in their hospitals are not fully vaccinated or simply not vaccinated at all. DeSantis has made statements claiming that these vaccines are saving lives and are drastically reducing mortality.

According to the Mayo clinic as of today, 63.6% of Florida’s population is fully vaccinated, and that includes over 95% of seniors.DeSantis press secretary Christina Pushaw took to Twitter, talking about Psaki, saying, “She lies brazenly because she knows the media won’t fact check her.”

It sure does warm the hearts of conservatives everywhere to see her toeing the line, trying to at least hold one liberal’s feet to the fire. Due to delays, the Biden administration failed to meet its goal of producing 500 million at-home COVID-19 tests available to the general public.

The Florida Sun-Sentinel reports that due to huge demand with Omicron surging they have experienced major testing kit shortages. The DeSantis administration says we need to prioritize testing, only testing those who are at higher risk, and in populations that are more likely affected by the outcomes.

Desantis is strongly advising against the testing of people needing to board airplanes and stop requiring citizens to show negative tests just to go into restaurants to order a burger.

He says we need to focus our resources on testing those with symptoms because they were testing a lot of asymptomatic people and that results in not having enough tests for those who are symptomatic or the extremely vulnerable population, so in essence, were wasting these tests when most people while we have a severely limited supply at the moment.