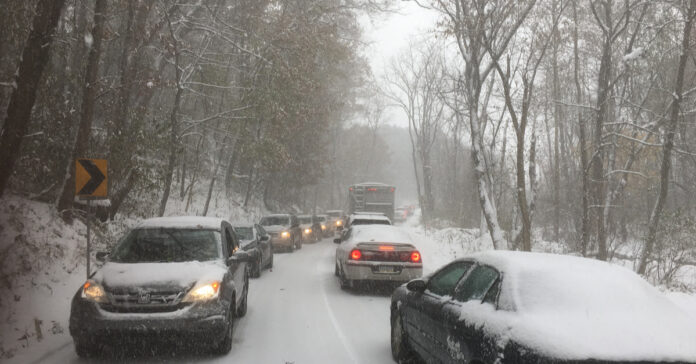 The latest snowstorm to trample the state of Virginia ended up stranding hundreds of cars on the I-95 interstate for nearly a day. The Democratic governor failed even to lift a finger to help those stranded in their cars. All he and his mafia party could do was try and blame it on the incoming Republican governor that had not even been sworn into office. Yet. Ralph Northam is the lazy liberal that abandoned the people when they needed his help.

Joe Scarborough is the host of “Morning Joe.” He took a moment to blast away at Northam and his heartless response to helping people that were stranded. Northam was so slow to help people that a whole day went by. And if that were not enough, the demonic governor blamed out-of-state drivers for clogging up the roadways.

Mika Brzezinski is the show’s co-host, and she pointed out that the roads were clear, but there still have not been any answers as to why the Democrat loser took so long to act. Many wonder what the soon-to-be ex-governor was doing when a crisis developed under his watch.

The spiteful response of the Northam was seen in his words. He stated that “I can certainly understand that many drivers may have been from out of state and so missed the clear and consistent messaging from VDOT and emergency responders to stay off the roads during the winter storm.” Not everyone can stay off the roads once they have left for work. They still had to get home, and the snowstorm made it impossible for that to happen. Northam could have commissioned the snow removal department to start earlier and treat the roads.

Northam’s shortsightedness believes that I-95 is a local roadway through the state. But it is a major interstate that spans the enter east coast. As the governor, he is responsible for making sure that the roadway stays open and treated during bad weather and good weather. And the fact that he let the road get as bad as it did is beyond excuse.

Northam cannot point his wrinkled finger at the drivers and blame the weather on them. He knew the storm was coming and failed to prepare for snow removal and rescue should the need arise. He could have commissioned the National Guard to arrive with their equipment. Still, all he did was watch with liberal delight as the people would struggle to stay alive on the cold roadway.

Even Democratic Tim Kaine ended up stuck on the roadway, and he could not believe the ignorance, Northam. People were crying out for help, and all the governor did was place his hands over his ears and ignore them.

Reports show that the roadway was never pre-treated to stop the ice and snow from accumulating. The rain supposedly would have just washed the treatment away. But that does not explain why plows removed the snow and salted the roadways once the rain turned to snow.