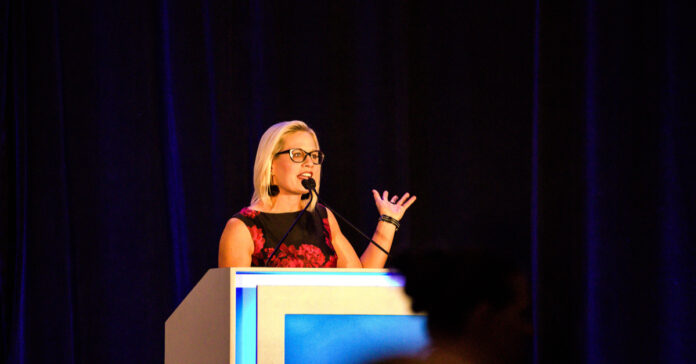 Senators Krysten Sinema (D-AZ) and Joe Manchin (D-WV) have been attacked and condemned for months on end because they fuse to simply shut up and drum on with the rest of the party. They are doing exactly what Americans expect from their elected officials; they are looking at what is best for their state and going for that. Not what is best to keep the party in power.

Despite this idea, private citizens have been using this to attack their very character to try and get them to change things up. These elected officials have largely taken these attacks and carried on with their chins held up high. However both have stated just how done they are with these ‘woke’ attacks, and how ready they are to get things rolling normally.

While using a 15-minute speech to show the Senate just how divided the politics of this country have become, Sen. Sinema seemed to hit a real nerve for many. “I ran for the U.S. Senate rejecting partisanship, willing to work with anyone to help Arizonans build better and more secure lives… I will not support separate actions that worsen the underlying disease of division infecting our country. The debate over the 60-vote threshold shines a light on our broader challenges. There is no need for me to restate its role in protecting our country from wild reversals in federal policy. American politics are cyclical and the granting of power in Washington, D.C. is exchanged regularly by the voters from one party to another. This shift of power back and forth means the Senate 60-vote threshold has proved maddening to members of both.”

This message of not supporting division is incredibly powerful. While many consider her and Sen. Manchin to be Democrats In Name Only or DINOs, they are doing what the American people have been asking politicians to do for ages; standing up for what is right. The division between the parties cannot last. It will only serve to destroy this great nation. This is something conservatives have understood for years. Unfortunately, the progressive left has long since forgotten that in the name of activism.

Sen. Sinema was not done there though. “The 2013 decision by Senate Democrats to eliminate the 60-vote threshold for most judicial and presidential nominations led directly to a response in 2017 by Senate Republicans, who eliminated the threshold for Supreme Court nominees. These shortsighted actions by both parties have led to our current American judiciary and Supreme Court, which as I stand here today is considering questions regarding fundamental rights Americans have enjoyed for decades.”

As she illustrated there, both parties have chopped up the system and made an absolute mess of things. The parties are very indifferent on how to best keep things going beyond the next election. They just keep kicking the can down the road and act as if they will fix things in the months and years to come. Unfortunately for them, they have been doing that for far too long. The time to fix things is now. The time to get America back on track and politicians working together was yesterday.

We have been a nation divided since Vietnam and Korea. Both wars divided the American people greatly. Sure when we have massive tragedies like 9/11 or the start of COVID we can all come together. That is when you see America at its best, and when you see the people acting like they always should. People like Senators. Sinema and Manchin should give Americans of all backgrounds faith that the system is not so far gone that it cannot be saved. If Democrats in particular will drop the rhetoric and come to the table things can be negotiated. Agreements and a better way of doing business can be established. That is something America has been lacking for ages.