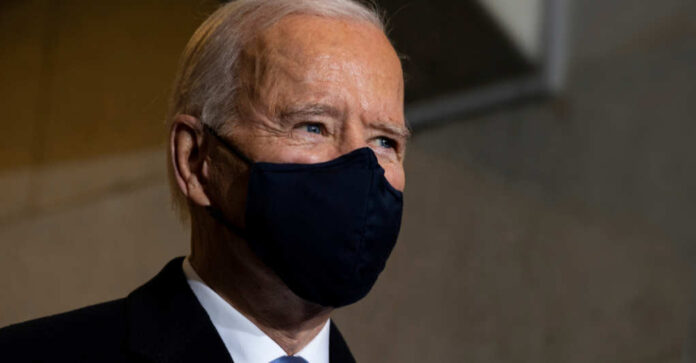 Since his first real captaining for the 2020 election, President Biden has picked ‘wearing a mask’ as the hill he would be happy to die on. The American people have been more than happy to oblige him in his request. As more and more people are ditching the masks because the Omicron variant is showing to be a much weaker strain than previous variants of the COVID virus, the President is finding himself losing the hill. People are just not willing to be uncomfortable and wear the mask any more than they absolutely must.

Appearing on his infamous video set (which is probably the dumbest thing any President has done when addressing the American people) he informed us that 1/3 of Americans don’t wear the mask at all. It’s rather surprising where he got that figure. In states that are not requiring them, it would seem like 7/8 of Americans aren’t wearing masks. He also admitted, “I think it’s part of your patriotic duty…it’s not that comfortable…it’s a pain in the neck.”

The American people don’t think this is a part of our patriotic duty. We have chosen to do our research. They have seen the science. They question that science (which is the root cause of how science is established in the first place) and are unwilling to blindly comply with a request. If they want us to wear masks, they can mandate it. Those who are willing to mask up to be out and about will do so. Those who aren’t will either stay home or stay in places that do not require the masks.

As much as he wants to cry about people not wearing the masks, he and his fellow leftist conspiracy nuts pick some odd ways to show an example. AOC was recently photographed going around Miami without a mask the entire time. President Biden recently spoke with reporters while sporting the ‘mask beard’ of having his mask yanked down, and even fully removed it while admitting “This looks stupid.”

The masks are not doing much if anything to help. As they have admitted the cloth masks are largely ineffective, and since the start of this many Americans have been wearing the cloth masks. When the surgical masks were harder to get people raced to their sewing machines and created masks. In a short, while an entire industry was born, thrived, and has slowly died out as fewer and fewer Americans choose to wear masks. When they are forced to they find humorous or unique designs to sport. Many are forgoing the surgical masks for the sake of comfort whereas before it was due to a lack of supply.

As President Biden gets worn down and gets ready to fight his final battles on this hill, he must admit that he has lost, and the American people are safe to resume everyday life. That also means giving up a lot of the control he was trying to build up. The American people never wanted his control, his taxes, his handouts, or his ideas for how to end COVID. They just wanted their daily lives to return to what it was before.

Now we have ‘experts’ dragging their feet on getting things back to the way they were. We have people who refuse to accept that this is ending the surge of gigantic panic. We are doing what civilization has done for thousands of years and adapting then resuming our normal lives. Except now we also have sky-high prices for things like gas, groceries, and other necessities. All thanks to Biden’s hyperinflation and horrifically ran infrastructure. May God save the American people from this horrific nightmare we call the Biden Presidency.