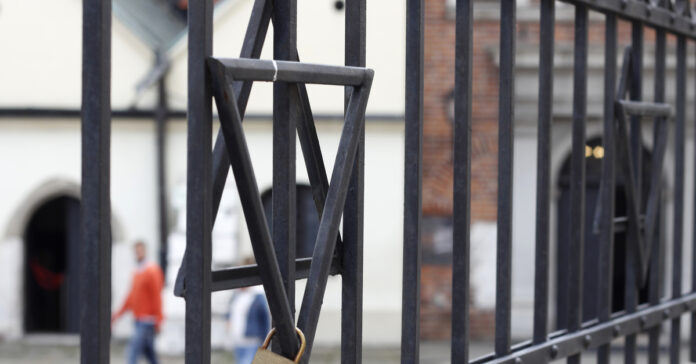 If you haven’t heard, there was a situation this past weekend at a synagogue in Colleyville, Texas. A gunman stormed the place and held four people, including the rabbi, hostage while demanding the release of a prisoner linked to terrorism. And while no lives, save the gunman’s, were lost in the aftermath, it was undoubtedly a rather harrowing experience.

And, apparently, one that Democratic President Joe Biden blames entirely on guns and homeless people.

According to the White House transcript from a press conference, while Biden was in Philadelphia on Saturday, Biden said, “I don’t have all the facts, nor does the attorney general. But, allegedly, the assertion was he got the weapons on the street. He purchased them when he landed.”

Biden went on to say that according to all the information he had, which, apparently, wasn’t much, no bombs were included in the gunman’s arsenal, a British national identified as Malik Faisal Akram. However, he definitely had at least one firearm, which he “purchased on the street.”

Biden admitted he had no real idea of what that meant but suggested that the weapons could have come from either a homeless shelter or the homeless community in the area, “because that’s where he said he was.”

Then, of course, Biden not so eloquently shifted to talking about gun control and the need for background checks. Because you know, if all guns were locked away or only given to government security teams, crime would never take place.

Biden said, “The guns are – we should be – the idea of background checks are critical. But you can’t stop something like this if someone is on the street buying something from somebody else on the street. Except that there’s too – there are so many guns that have been sold of late; it’s just ridiculous.”

His argument, as well as that of most of his colleagues, is that if we were more “consistent” on things like gun sales, gun purchases, and “ghost guns,” as well as a “whole range of things” Biden is trying to focus, we wouldn’t have these types of situations.

According to him, terrorists like Akram wouldn’t have access to weapons like this. They wouldn’t be prone to furthering their cause, and the whole world would be better.

The only problem is that Biden doesn’t really know what he’s talking about. As usual, he’s making speculations, and even admitting to it, about facts that he just doesn’t know.

First off, he mentions background checks as if they would have done any good in this situation.

Little does Biden likely know that background checks are conducted during gun purchases pretty much across the board, at least for legal gun sales and in most states. But as this guy was a British national, without US citizenship and had ties to al-Qaeda, the process would have looked much different and without any real likelihood of passing. So he likely went about getting his weaponry by less than legal means.

Enter “the streets,” which Biden immediately assumed meant the homeless…

Now, I’m not saying that Akram couldn’t have purchased guns from homeless individuals, as illegal gun sales can pretty much happen anywhere and anytime. But assuming as much is pretty much the epitome of prejudice.

Secondly, by turning this whole thing into a “gun control” matter, Biden has lost sight of the bigger issue, terrorism, and anti-Semitism.

The gunman, a known Muslim, entered a synagogue, a place of worship for the Jewish community, a long-time “enemy” of Islam, if Islamic officials are to be believed, and pulled a gun to hold several Jewish community members hostage. During those long hours, Akram demanded the release of a Pakistani woman named Aafia Sidiqqi, who has ties to al-Qaeda and is currently serving a terrorist-linked prison sentence in Fort Worth, Texas, not too far from Colleyville, where the hostages were taken.

Biden could and should have taken this attack as exactly what it was, a way to hurt the Jewish community by promoting Akram’s extremist ideals. Instead, Biden has turned into a political stunt about gun control.