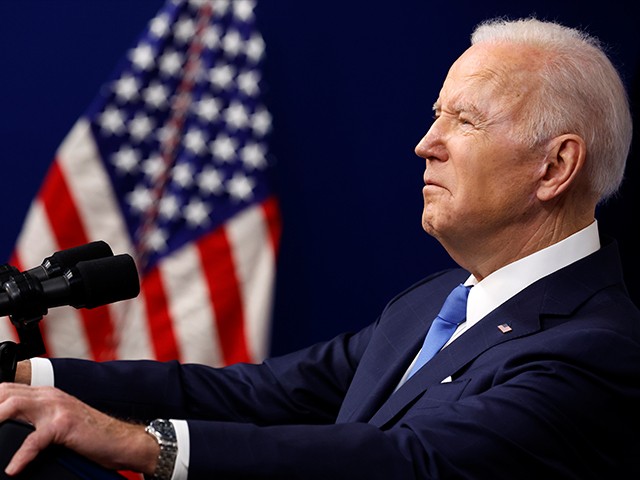 America now has soaring crime, a devastating border crisis, and a tragic fentanyl drug epidemic, not to mention the unforgivable withdrawal from Afghanistan, anti-American mandates, and fumbled messaging on COVID-19.

The data couldn’t be clearer. At the end of 2021, President Biden had an abysmal 43 percent approval rating, with 53 percent of Americans strongly disapproving of his performance. One Quinnipiac poll last week put Biden’s approval rating at an embarrassing 33 percent.

While some tone-deaf left-wing pundits may scratch their heads over President Biden’s plummeting voter confidence, it comes as no surprise to the American people who face the daily consequences of this disaster of a presidency.

The greatest farce of Biden’s first 365 days was his inauguration promise of unity. He told Americans, “We have to stop our opponents as enemies.” Sadly, that fictious message did not apply to unvaccinated Americans, conservative Americans, or the millions of parents concerned about their children’s education. It also did not apply to lawmakers who oppose the President’s agenda – as Biden’s reign of one-party rule has been characterized by authoritarian power grabs with no intention of bipartisan compromise.

Perhaps the most obvious daily and direct consequence of President Biden and House Democrats’ reckless agenda is the fact that inflation is at a 40-year high. ABC News reported last month that nearly 70 percent of Americans disapprove of the President handling of inflation. Families across the nation are all having to pay more to get less. The Democrats’ solution? Sign more blank checks to expedite their socialist agenda with reckless abandon. Republicans must show voters that there is a commonsense solution to the woes of the Biden era. A Republican-led Congress will put forward business and worker-friendly, cost-effective America First policies that will get our economy back on track.

Gas prices are displayed at a Chevron station on June 14, 2021, in Los Angeles, California, as the average price for a gallon of gasoline continues to rise amid inflation fears. (Mario Tama/Getty Images)

The Biden administration’s catastrophic Afghanistan withdrawal was an indisputable foreign policy disaster. After eight months of misguided policies, the Afghanistan withdraw pulled back the curtain on the true failure of this administration in times of crisis. There’s no other way to interpret what happened. Our president promised to “leave no Americans behind,” but he did just that. He abandoned his fellow countrymen and left our allies out to dry. Worse yet, the president’s politically motivated decision, against his general’s advice, led to the tragic deaths of 13 beloved American heroes, including Marine Sgt. Nicole L. Gee, who was stationed in my district in North Carolina. Gold Star families still reeling from the wounds of Afghanistan were then slapped in the face upon hearing that the Biden administration would consider paying illegal aliens more for breaking our laws than our Gold Star families received after their loved one made the ultimate sacrifice. Our standing on the world stage has been decimated. Americans are still behind enemy lines. We can do so much better.

President Joe Biden and First Lady Jill Biden attend the dignified transfer of the remains of fallen service members who were killed during the U.S. military’s withdrawal from the 20-year Afghanistan war. (SAUL LOEB/AFP via Getty Images)

In just 12 months, U.S. Customs and Border Protection has encountered over 1.7 million migrants at the Southern Border. This record-breaking statistic occurred after President Biden systematically unraveled the former administration’s strong, commonsense border policies. More tragically, fentanyl, 80 percent of which enters the country through our southern border, has become the leading cause of death among adults 18-45. Overdoses hit a record high in last year. Biden’s national security policies have unraveled just as quickly as the cancerous defund the police movement that plagues Washington Democrats. Just this past year, 16 American cities — all of which are run by Democrats — set record violent crime rates. This government should be “For” the people, not against them.

Haitian migrants cross the Rio Grande river to reach an encampment of more than 10,000 migrants on the U.S. side of the border in Del Rio, Texas, on September 19, 2021. (PAUL RATJE/AFP via Getty Images)

President Biden has spent his short presidency steamrolling the American people with liberal power grabs. From executive orders that shut down American energy and the Democrats’ attempt to federalize elections to unconstitutional vaccine mandates, President Biden has made liberal Washington power grabs his top priority. He is tone deaf to the needs of the average American, and I am confident that voters will hold him accountable.

I would ask all Americans of any political persuasion to ask themselves: Is America better off after one year of one-party rule? President Biden and Washington Democrats have failed to address their self-inflicted disasters; and from the looks of it, it seems the administration will continue on its crash course to destroy the American way of life.

Rep. Greg Murphy, M.D. represents North Carolina’s 3rd congressional district in the U.S. House. He is a member of the House Ways and Means Committee and Vice Chair of the House GOP Doctors Caucus.