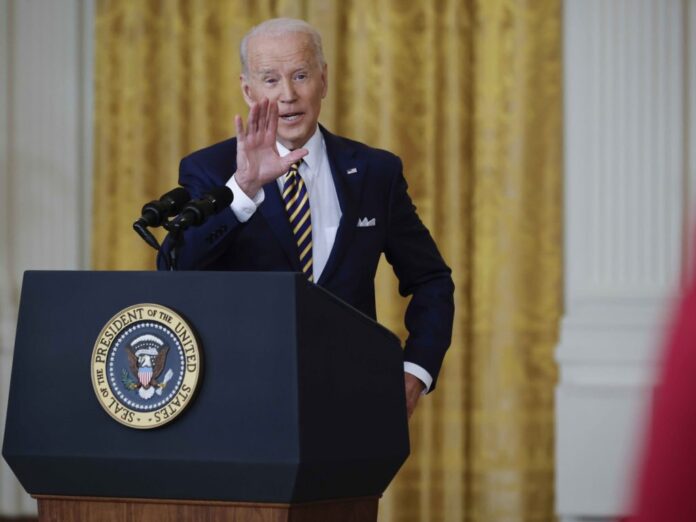 Today, that rival, President Joe Biden, is practically inviting Russia to invade Ukraine, even declaring that Russian President Vladimir Putin “has to do something,” and hoping it is just a a “minor incursion.”

Oh, how lyrical they waxed, that Democrat impeachment cabal, about how desperate Ukraine was to hold the Russians at bay, and how cruel it was for Trump — who had given them anti-tank missiles, unlike his predecessor — to ask for some help in figuring out into what former Vice President Biden was doing by demanding the ouster of a prosecutor with jurisdiction over the company that was paying his son, Hunter Biden, a fortune to sit on its board, threatening U.S. financial support.

“It is important to note that our country’s policy of supporting Ukrainian sovereignty and territorial integrity, promoting Ukrainian prosperity, and strengthening a free and democratic Ukraine, as a counter to Russian aggression, has been a consistent, bipartisan foreign policy objective and strategy across various administrations, both Democrat and Republican,” said Lt. Col. Alexander Vindman, the Democrats’ star witness, when he testified in the public impeachment hearings.

Vindman was silent Wednesday about Biden throwing Ukraine to the wolves, other than to tweet that Ukrainian President Volodymyr Zelensky ought to “be preparing his people for what’s coming” rather than “presenting false confidence.”

He, too, appears to have given up any hope of deterring Russia, which had never seemed to be a problem for the president Vindman tried to overthrow — legally and constitutionally, of course, though he would not tell America who the “whistleblower” was.

Ultimately, Democrats could not come up with compelling evidence that Trump had committed “Treason, Bribery, or other high Crimes and Misdemeanors,” despite the best efforts of House Intelligence Committee chair Rep. Adam Schiff (D-CA), who held witness depositions in secret and subpoenaed the private telephone records of the president’s lawyer, and members of the opposition. They argued that Trump could be impeached for maladministration, a low standard the Framers rejected.

By that standard, President Biden deserves to be impeached — over his ongoing failure to support Ukraine, the disastrous withdrawal from Afghanistan, and the crisis at the southern border, all of which are the result from dereliction of duty as commander-in-chief.

And while I agree wholeheartedly with Sen. Kyrsten Sinema (D-AZ) that we need to find common ground in American politics, her party first needs to understand that there will be consequences for overstepping the line.

Sometimes, two wrongs do make a right, if they deter further wrongs.

Sinema accepted that tacitly in her speech last week defending the Senate filibuster, when she noted that Democrats had provoked Republicans to end the filibuster for Supreme Court nominees by breaking it first themselves for other appointments.

The lesson she took from that experience was that Democrats should not break norms like that again. Unfortunately, the rest of her party needs more education on that point.

So when Republicans take back the House in 2022, as seems likely — with Biden spreading his own “Big Lie” about the “illegitimate” election, ten months ahead of time — they need to begin an impeachment inquiry against Biden.

It should ask whether the Trump impeachment was done to help Biden’s election, and should subpoena Schiff and Hunter Biden, among others.

Deter Putin with a credible threat of force, and deter Democrats by doing to them what they have done unto others.