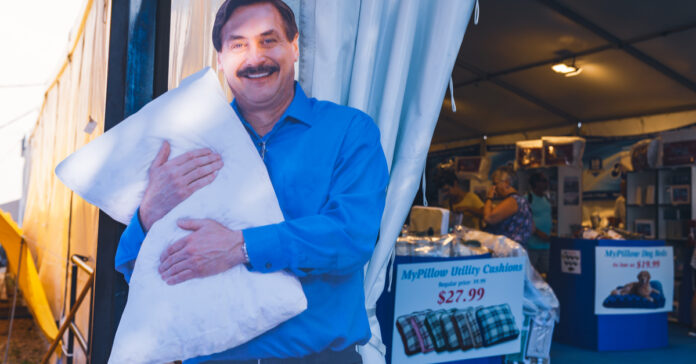 People have said Mike Lindell gets the last laugh but we all know that’s not the kind of guy Mike Lindell is, either way, we’d understand. “Go woke, go broke” is proven to be, as Former President Trump refers to it, “fake news” at this point.

If you supported Mike Lindell after Bed Bath and Beyond you’ll be getting even better rest now. Big Tech has much more influence on businesses and people than we have previously realized. It has had its hand in misleading the public when they google My Pillow, auto-generating negative examples, implying a demise of Lindell’s company.

Back in 2021, CNN Business reported that after an overwhelming amount of pressure from the left, Bed Bath and Beyond Severed ties with Mike Lindell. For no other reason than the fact that Lindell was an avid supporter of President Donald J. Trump.

Aren’t Cancel Culture mobs just the best? Kinda feels like Jr. high all over again. CNN took advantage of their reach by repetitively drawing attention to the fact that Bed Bath and Beyond was doing its part to push the anti-trump agenda from the left.

Bed Bath and Beyond flatlined soon after the attack on Lindell. It was almost like no one had run the numbers and told them the Pro-Trump, America first was their target audience.

Despite all the efforts from the left, My Pillows sales have skyrocketed leaving Bed Bath and Beyond in the dust. Lindell has seen so much success due to the attacks made from the left, by now, they’re sure to be cringing.

Epoch Times reported, Bed Bath and Beyond recently announced by Feb 2022 they would be permanently closing stores from all across the country, including 37 stores in 19 states. In the last 12 months, the company has suffered by shares being down around 31 percent.

With statistics such as these, a company has to address concerns.

CEO of Bed Bath and Beyond, Mark Tritton, stated they lost around $100 million in sales in just the third quarter alone but blamed it on supply chain issues, directly related to COVID-19. Surely ditching popular products without supply chain issues hasn’t affected their numbers.

Lindell is a man who turned his life around after finding Jesus. He has supported those who believe that America can be everything it once was. He simply did not fit the narrative the Woke agenda pedals trying to convince Americans that we can not be successful without the support of the woke sector of society.

Never underestimate the conservatives, the blue-collar Americans that will buy just about anything to support those who fight for our country and all it stands for. In this case, Lindell supplies such excellent quality American-made products consumers keep coming back for more.

It is becoming increasingly apparent that people are so fed up with the woke, leftist snowflakes they are willing to put their money where their mouth is. A man by the name of Gabriel Manigault once said. “The enemy of my enemy is my friend.”

We believe that to be a true statement as we watch all the extra support of Lindell these days, showing us how well he’ll be able to capitalize off the hate the left has for him.