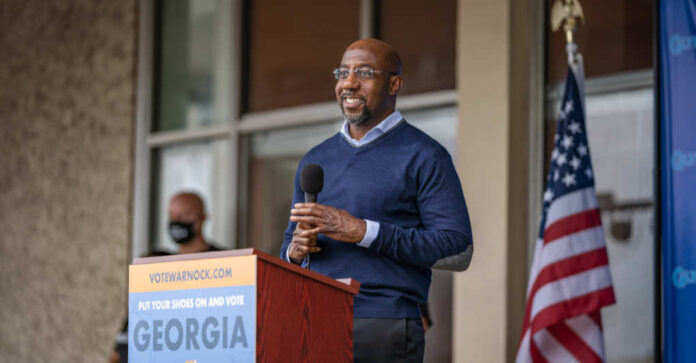 American politicians have been slinging mud from one side to the other for years. Part of that comes not just from direct candidate-vs-candidate targeted attacks, but instead is widespread and targeted at a whole demographic all at once. Most recently in 2020 now President Biden told a radio host “You ain’t black” if you didn’t vote for him. That was bad enough, but Senator Raphael Warnock (D-GA) has now blown him out of the water.

Appearing on Monday’s broadcast of “The View” from ABC, Sen. Warnock let loose about his feelings about Dr. King and on politics in America. “I have to be honest. I am saddened by where we are right now. But Dr. King was a sober-minded soldier in the nonviolent fight for freedom. He knew it would not be easy. He used to say that the arc of the moral universe is long, but it bends toward justice. So he kept bending that arc then. We have to keep bending that arc now. It’s not unusual to have this kind of backlash, you know, when you take two steps forward often, there is push back driven by fear and bigotry.”

He is not wrong here. Backlash is common, and it was something Dr. King would have expected. Especially given the racial bigotry that still permeates many parts of the US. What he would be surprised about is the level of bigotry that is now coming from his own people. I wonder if he ever thought he would see days like today, or if he had just envisioned peace?

Sen. Warnock then focused his attention on the voters. “The good news is, we have the tools in the Senate to do something about this. We can pass voting rights. Democrats have the slimmest of majorities, but we have the majority, nonetheless. Sadly, our colleagues on the other side have chosen power and politics over a commitment to democracy. They are trying to turn democracy on its head. So rather than the people picking their politicians, the politicians are trying to cherry-pick their voters. It’s anti-democratic, it’s anti-American.”

People are not cherry-picking their voters. They are making moves when it comes time to re-zone a district due to changing demographics. This happens frequently across the US and has for ages. It prevents the opposite from happening; people flooding a zone they once lost greatly to swing the votes to the other direction. That may sound insane and almost comical, but it could happen.

With the massive exit from places like California to places like Texas, voting must change. These tens of thousands of residents will choose someplace to call home. When that population experiences a sudden boom, or suddenly finds itself losing many people the districts need to be rezoned. That helps ensure people can vote, and just as importantly it ensures that their voice is represented on a larger stage more accurately.

To expect things to remain stagnant is ignorant. Much the same, to think politicians will simply take/give what is fair for all and not just what is best for their party is foolish. Politicians will fight over anything. From voting lines to the type of grass that is planted outside the new city hall. This means they want to get the most for their party for their efforts. Giving up quickly just to be done and over the issue doesn’t happen, nor does it make them “anti-American”.