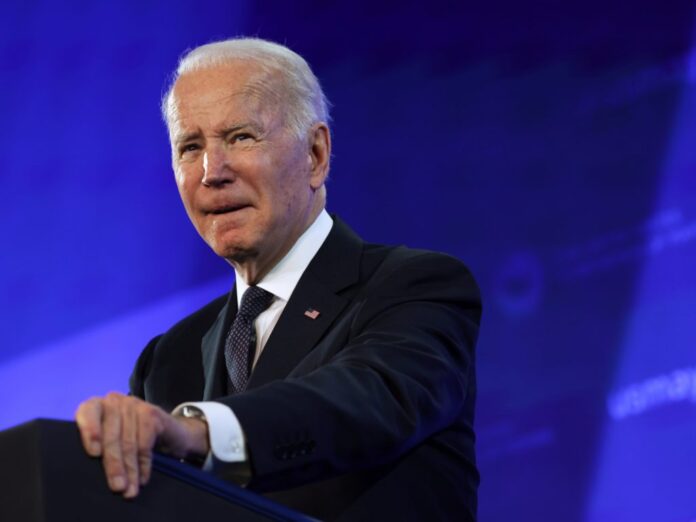 The State Department announced it would withdraw the families of staffers and encourage private American citizens in Ukraine to leave because of an alleged imminent threat of invasion of the country by Russia. Russia invaded Ukraine nearly a decade ago, in 2014, and continues to colonize Ukraine’s Crimean peninsula to this day. The Ukrainian government also accuses Moscow of being heavily involved in the ongoing war in Donbas, eastern Ukraine, which the Kremlin insists is a civil war that has nothing to do with it.

Concern for Ukraine escalated last week after President Joe Biden announced that his administration would not intervene in the event of Russia committing a “minor incursion” into Ukraine and appearing resigned to Russian leader Vladimir Putin inevitably seizing the country. The Ukrainian government refuted Biden’s bizarre comments. In a speech last week, President Volodymyr Zelensky assured his people that the risks of Russian invasion “have existed for more than a year, and they haven’t increased” recently, contrary to Biden’s comments.

The risk of a full Russian invasion of Ukraine increased last year when Biden chose to lift sanctions on the Nord Stream 2 pipeline project, which will connect Russia to Germany and grant the Putin regime unfettered access to the Western European natural gas market. While much of Washington, DC, debates the hypothetical of American military action in Ukraine, Zelensky has spent much of the past year encouraging Washington to simply restore the Trump-era sanctions on the pipeline before it produces windfall profits that could fund an invasion.

“The Foreign Ministry has taken into account the U.S. Department of State’s departure decision for families of the employees of the U.S. embassy in Kyiv and the authorized voluntary departure of certain employees,” Oleh Nikolenko, a spokesman for the Ukrainian Foreign Ministry, told the news agency Interfax on Monday. “As we respect the right of foreign states to ensure the security of their diplomatic staff, we believe that the move of the U.S. side is premature and displays excessive caution.”

“There has been no drastic change in the security levels lately, considering that the Russian threat has been persisting since 2014, and the Russian military buildup near the border began back in April 2021, he said,” according to Interfax, repeating Zelensky’s stance.

Nikolenko also noted that, as far as his government is aware, the American embassy in Kyiv “will continue its full-fledged operation.”

A Ukrainian Military Forces serviceman watches through spyglass in a dugout on the frontline with Russia-backed separatists near Gorlivka, Donetsk region on January 23, 2022. (ANATOLII STEPANOV/AFP via Getty Images)

“First, as you know, we’ve authorized the departure of some U.S. Government employees, while we have ordered the departure of all family members of U.S. Government employees at our embassy in Kyiv,” one of the senior officials said. “The State Department has also elevated our Travel Advisory for Ukraine to Level Four – Do Not Travel due to the increased threat of Russian military action. I would note that the Travel Advisory was already at Level Four – Do Not Travel due to [Chinese coronavirus].”

“These decisions were made out of an abundance of caution due to continued Russian efforts to destabilize the country and undermine the security of Ukrainian citizens and others visiting or residing in Ukraine,” the official stated, appearing to agree with the Ukrainian government’s assessment.

The announcement appeared to confuse and irritate journalists at the briefing.

“Guys, can you just please clarify, like, exactly what this order is?” asked Politico senior foreign affairs correspondent Nahal Toosi. “Like, you’re ordering the relatives of all of the diplomats to leave, but you’re giving, like, the option to some or all of the diplomats themselves to leave? Like, it’s written in this really confusing way, and I’d be really grateful if you could clarify what it actually means.”

The senior State Department officials insisted that the measure was a response to a “holistic view” of the current situation on the Russo-Ukrainian border. That situation appeared to change significantly after Biden signaled during a press conference last week that there were conditions in which the United States would not help Ukraine should Russia invade.

“I think what you’re going to see is that Russia will be held accountable if it invades. And it depends on what it does,” Biden told reporters. “It’s one thing if it’s a minor incursion and then we end up having a fight about what to do and not do, et cetera.”

Biden also told reporters that he believed Putin would “move in” to Ukraine because “he has to do something,” apparently justifying any further invasion of the country as inevitable.

“He’s never seen sanctions like the ones I promised will be imposed if he moves, number one,” Biden asserted.

A woman holding a hand-drawn sign urging Ukrainian membership in the EU and NATO attends a patriotic rally on Unity day on January 22, 2022 in Kyiv, Ukraine. (Sean Gallup/Getty Images)

Zelensky has spent much of the past year questioning why those sanctions are not already in place, as they were under President Trump. In June, Zelensky told the Washington outlet Axios that Biden had sent “all the signals” that he would impose further sanctions on Nord Stream 2, but then abruptly lifted the sanctions already in place. Zelensky said he found out the sanctions had ended from media reports – no one from the White House bothered to inform him. The Ukrainian president repeatedly described himself and his administration as “unpleasantly surprised.”

Zelensky’s initial response to Biden’s “minor incursion” remark was to deliver a nationally televised speech urging Ukrainians to ignore the White House’s alarmism on Russian invasions, asserting that Russia has been invading Ukraine for almost a decade.

“Didn’t the invasion start in 2014? Has the threat of war emerged just now? These risks have existed for more than a year, and they haven’t increased,” Zelensky said. “What has increased is the hype around them.”

To Biden, Zelensky issued a simpler message: “there are no minor incursions.”