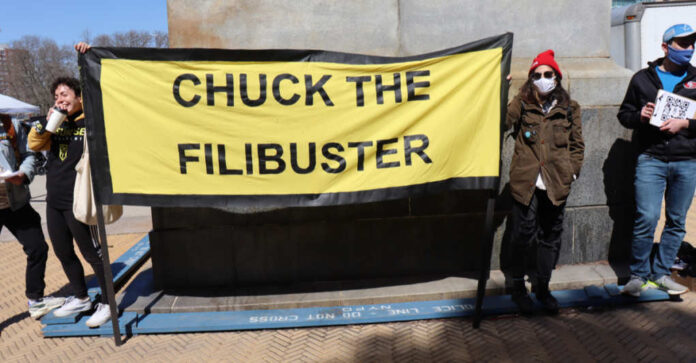 The bullheaded Democrats are at it again, trying to tear down the final few barriers that keep them from having absolute control over the politics of America. The liberals would love to rid themselves of the filibuster that protects the country from the wild swings of preference between the political parties. The liberals have a socialist agenda that they need to push out, but before they can do their dastardly deeds, they must kill off the protective measures they once held so dear.

Chuck Schumer is the Senate Majority Leader. He has tried to destroy the filibuster on more than one occasion. The Democratic Party has pushed and prodded their efforts and has failed miserably. The liberals tried to vote on removing the filibuster, which ended up in defeat because members of their part voted them down.

Senator Joe Manchin and Senator Kyrsten Sinema voted against the silly Schumer’s efforts to destroy America. The vote ended up 52-48.

Kamala Harris could not even cast a tiebreaker vote because she had lost her influenceable powers. After all, no one trusts her any longer. Harris has failed at everything she has been assigned to do. And the country is tired of her sitting around neglecting the American people.

The rejection in the Senate was not the only thing that surprised everyone. A former Secretary of Labor, Robert Reich, had the typical reaction the Democrats have when they don’t get their way. He said, “Tonight, Republican senators lined up to shake Kyrsten Sinema’s hand. Democratic senators should have given her the backs of their hands.”

This lousy Democrat was trying to motivate people to strike Sinema in the face instead of shaking her hand for voting the way she did. The level of violence that she has leveled against her head is so typical of the tyranny the Democratic Party stands for. The wicked liberals are willing to attack even their own to get what they want.

The shame that Democrats are facing stings to their very soul. So much that they would shake Sinema’s hand while secretly seething a desire to knock her upside the head just like Reich wanted them to.

The sad part is that the tweet that went out was taken down just as fast as it was put up. The nasty man wanted to see the filibuster torn down and the flood of socialism allowed into the country. But the people did not want what the Democrats wanted to do. And a few of their members decided it best to listen to the people instead of their selfish desires like everyone else.

The issue is that the Democrats need so desperately to pass federalized voting regulations that would force conservative states to give up on fair elections. The massive overkill would allow the liberals to set up stations all around the country that would enable them to cheat at future elections.

The 50 Republican Senators and the two Moderate Senators stopped the liberal’s takeover attempt. The point is that those who would try and corrupt the future will be put down when confronted by those who do what is right.

When it comes to the heart of the issue, the Democrats love power and want to do whatever they can to stay in power. Many of the states that the Democrats target in the 2020 election have taken steps to keep those horrible events from ever retaking place. The Democrats need to pass their voting reform bill to force those states to let the fraud happen again.

Joe Biden and his regime need to rid themselves of the mechanisms that keep them under control. They toiled with the idea of flooding the Supreme Court with more judges sympathetic to their cause. They have toiled with the idea and failed to remove the filibuster. And now they are trying to cram voting reform nonsense and fail. And some point, they will realize that what they are doing to the country is not what the people want. The people want to be free, and they will vote Republican to make sure that it happens.