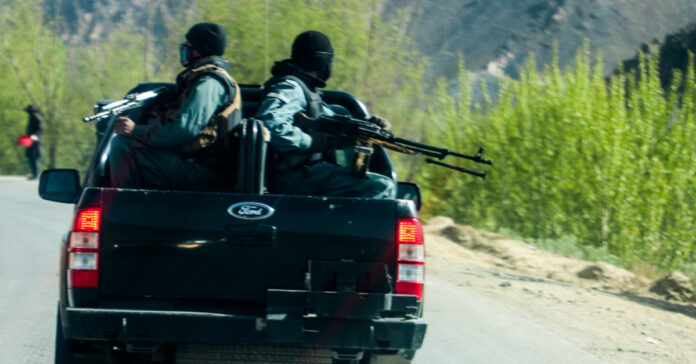 After two decades of brutally murdering Afghan families, hanging people from light poles, and claiming an untold number of lopped-off heads, the Taliban is begging for help. The Afghan citizens who survived their homes and villages being destroyed are hungry. So are the illegitimate children of the women the Taliban soldiers brutally gang-raped along the way. In attempts to remedy the situation, Taliban leaders took baths, starched their robes, and jetted off to Norway.

Since claiming Afghanistan, this is the first time Taliban leaders have been willing to sit down with Western diplomats for a round table discussion, and it’s only because it’s they who need help.

So as not to be disturbed the meeting was held at a private hotel sitting atop a snow-capped mountain. The Taliban’s message was clear. They want their money back. The US still has a freeze on ten billion of it and other Western nations are holding onto smaller amounts that rightfully belong to Afghanistan. They claim Afghanistan to be in a “precarious humanitarian situation,” though it is they who have inflicted the majority of it.

Western officials one-upped the Taliban by first allowing a few Afghan women’s rights activists, followed by some human rights defenders who are on the pulse of everyday street life, to have their says from a citizen on the ground’s view.

Diplomats from the US, the EU, France, Italy, Britain, and Norway listened intently as women’s rights activist Heda Khamoush took to the podium. She held up a photo of two women, Tamana Zaryabi Paryani, and Parwana Ibrahimkhel, both of whom were recently arrested at an anti-Taliban demonstration in Kabul against being forced to wear a hijab and an Islamic headscarf. It’s been well over a week and neither woman has been seen nor heard from.

Azam, refusing to accept such an absurd accusation said he was “not aware of that” ever happening. He went as far as to suggest that perhaps the citizens the diplomats invited to speak at the meeting might be activists who’ll say anything to get asylum. They shouldn’t be trusted.

At the meeting’s end, women’s rights activist Mahbouba Seraj could hardly contain her anger at Azam’s remark. “If they continue this way – to tell us something and do something else – that’s when the trust is going to break, completely.”

Afghanistan’s deputy culture and information minister, Zabihullah Mujahid, took to Twitter with the following hogwash statement. Participants of the meeting recognized that understanding and joint cooperation are the only solutions to all the problems of Afghanistan. All Afghans need to work together for better political, economic, and security outcomes in the country.”

Easy to say, but this isn’t what’s being done. Seraj sarcastically referred to when the Taliban asked her group what they wanted to see happen for women. “We gave them a paper. They took it. They were very, very cordial about it.” But they’ve not heard one single thing in reference to the paper yet, a nobody is holding their breath.

And as far as the Taliban feeding all the hungry people of Afghanistan should their money be released, who’s buying into the notion of them becoming nice guys and doing that?