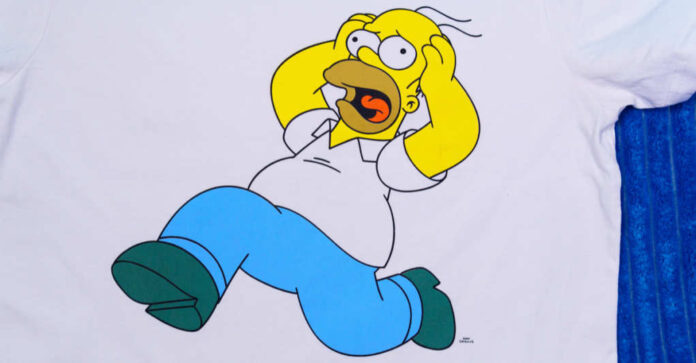 Back in 2007, The Simpsons became more than a TV show. They now had a big screen, full-length feature film. They had finally made it. Part of making it meant more celebrity cameos. Celebs like Tom Hanks who delivered the infamous line “Hello. I’m Tom Hanks. The US Government has lost its credibility, so it’s borrowing some of mine.” Well now 15 years later, real life is imitating art, and Axios got an exclusive look and gave us a preview.

With the anniversary of Biden taking office occurring, the White House thought it would be appropriate for Hanks to provide the voice-over for a video ad that is supposed to inspire the Nation and includes stories of hope as told by ‘average’ Americans. This promotion of Biden’s first year in office combined with Hanks’ reassuring voice is something the Democrats expect to be a home run for them.

Quite honestly this is a comical idea that should shock nobody. Aside from the fact that The Simpsons tends to predict everything, this is just too comedic to ever be taken seriously. How did nobody from President Biden’s entire staff tell him that The Simpsons have already done this and that this is a bad call?

It’s almost as if the progressive left serves no other purpose than to find new ways for America to be made a mockery out of. Bringing a cartoon to life (albeit a cultural icon) in order to push a political agenda is absolutely insane and the bottom of the barrel of ideas for them to pull off. Yet, here we are, and it’s not as funny as it was in the movie.

While the ad does mention the president as it is his inauguration video, the 501(c)(4)

Funding for the production company prevents them from mentioning any political parties. This means a much more watchable clip than many would believe. Does it mean it’s perfect? Far from it, but it’s on its way.

In a statement to Axios, the committee said “In recognition of the President’s first year in office, the Biden-Harris Presidential Inaugural Committee believed it was important to celebrate the strength and perseverance of the American people in the face of extraordinary adversity, just as we did a year ago today.” While a lovely quote, it doesn’t tell the tale properly.

With the 2022 midterms coming up, it would seem as if the hidden agenda behind this video is to in fact borrow Hanks’ credibility to assure the American people that the system is still working. To remind them that their mail is still delivered, and their trash picked up. That the system didn’t fall apart, we are all still in this together, and to try and unite us as a team. Like a horrible little league coach, most of us got stuck with, when the chips are down he is peddling his magical ‘we can still achieve victory’ speech. The problem is the American people can’t buy it anymore. We can’t afford to with all this inflation.