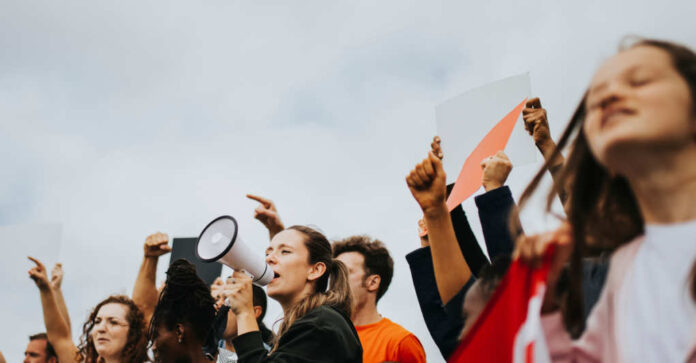 The COVID-19 Pandemic is an event that should have been over a year ago. But the insane Democrats found a way to weaponize the virus to use as their political means to seize power and destroy freedom. The liberals believe that they have all the power, and the people should not be allowed to voice their opinions unless it agrees with the established norm.

The Constitution of the United States allows for peaceful gatherings of people wishing to make their collective known to elected officials. But the Democrats do not understand what peaceful means. Every time they marched during Donald Trump’s presidency, they got violent and had to be dispersed. But the one-time people gather under Biden’s tenure; the peaceful are treated like criminals.

Washington, D.C. residents are sick and tired of living in a constant state of lockdown and pandemic hysteria. Thousands of people gathered to speak out against the vaccination mandate and other regulations that were causing massive headaches and problems for everyone.

The march leaders pointed out that they are for vaccinations but not if they will be forced on people. The mandates have fallen in court, and there is no reason anyone should be forced to inject something into their body.

Several high-profile names were at the rally. One of those names was Dr. Peter McCullough. He stated, “Now, there’s not a single person here who is against the broad use of vaccines as we use them in our clinical practice. We have a circle of medical freedom. You have the freedom; you and you alone have the autonomy over your body.”

The right to determine what is best for one’s health is a personal freedom that should never be infringed upon. Once that freedom is taken away, it is time before the government comes back to take something else away. Or they start choosing which people are worthy of life-saving surgery.

The liberal-controlled area makes people show their vaccine passports to enter and eat in restaurants. The city has reverted to segregation days and making people feel like second-class citizens. The protestors are sick and tired of living like prisoners in their own homes.

People visiting the city cannot enjoy their vacations or time in Washington because of the socialist-run city. Once the people lose their right to choose, they are one step away from slavery. The Democrats think that they have all the answers, but in the end, all they have are answers on how to destroy freedom.

The pandemic mandates are just the start of the downhill slide that leads people into horrible conditions. People come to the United States to escape the tyranny of their homelands ruled by socialism and communism. People fleeing these lands will never support the wicked ways of the Democratic Party, and they will voice their concerns when things start to look like the places they left.