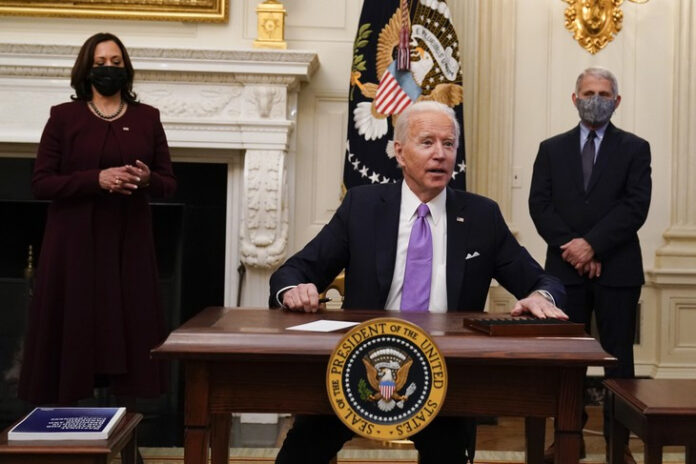 During the early days of the Biden presidency, he was signing executive orders into law on a seemingly daily basis. These photo ops were supposed to prove that Biden had the right idea about how to run this country. In reality, these were just attempts at stroking the egos of the far-left Democrats who voted for him.

They had to see results and they had to see them right away….or else! All they would have done is their usual whining on social media but we digress! As a career politician, Biden knew that he could not enact a full leftist agenda, though. At least half of the American people would have been furious with him if he had tried.

In order to pass these initiatives and policies, the only way to do so is by executive order. He went around Congress, so that he could successfully scrap any Trump achievement possible. The level of petty that was on display here was off the charts. These are the same people who refused to move into the White House until it had been professionally cleaned.

Now, Biden is throwing a few more Trump achievements on the fire. He is not content to merely get rid of a few of his advancements. No, folks, he wants to remove all of them. The orange man is bad and he wants to make sure that everyone knows this. Biden’s whole campaign seemed to be built around that idea.

If you didn’t like him, that meant that you simply needed to go ahead and vote for Trump. No legitimate concerns could be raised because he would wave them away. Biden is now setting his sights on squashing the rights of conservatives and he will be adding a side of further humiliation for those who care deeply about public monuments.

For starters, Biden is getting rid of the Garden of American Heroes. This was an order that was signed by Trump, in hopes of creating space for monuments. Trump knew that this would upset the far left. As you can probably recall, they spent a decent chunk of last year running around and ripping them all down.

Any monument that they deem unworthy has to come down and that is that. They do not want to listen to reason and they do not care about the rule of law. Thanks to Biden, we are going to be right back at square one. Last year, on the 4th of July, Trump signed the Building and Rebuilding Monuments to American Heroes order into law. No location was specified for the garden at the time, though.

The Department of Interior was supposed to find the right location. Trump wanted to include Kobe Bryant, Walt Disney, and Jeopardy! host Alex Trebek in the monument. “America owes its present greatness to its past sacrifices,” Trump said at the time. “Because the past is always at risk of being forgotten, monuments will always be needed to honor those who came before,” he continued.

Biden’s getting rid of the “Protecting American Monuments, Memorials, and Statues and Combating Recent Criminal Violence” order, too. This order was signed in the wake of all the destruction that took place last year, as leftists took to the streets and destroyed a wide range of Confederate monuments. “Individuals and organizations have the right to peacefully advocate for either the removal or the construction of any monument. But no individual or group has the right to damage, deface or remove any monument by use of force,” Trump wrote in the order.

Last but not least, Biden’s also gotten rid of the ‘Preventing Online Censorship’ order. “Twitter now selectively decides to place a warning label on certain tweets in a manner that clearly reflects political bias. As has been reported, Twitter seems never to have placed such a label on another politician’s tweet. As recently as last week, Representative Adam Schiff was continuing to mislead his followers by peddling the long-disproved Russian Collusion Hoax, and Twitter did not flag those tweets. Unsurprisingly, its officer in charge of so-called ‘Site Integrity’ has flaunted his political bias in his own tweets,” Trump wrote at the time.