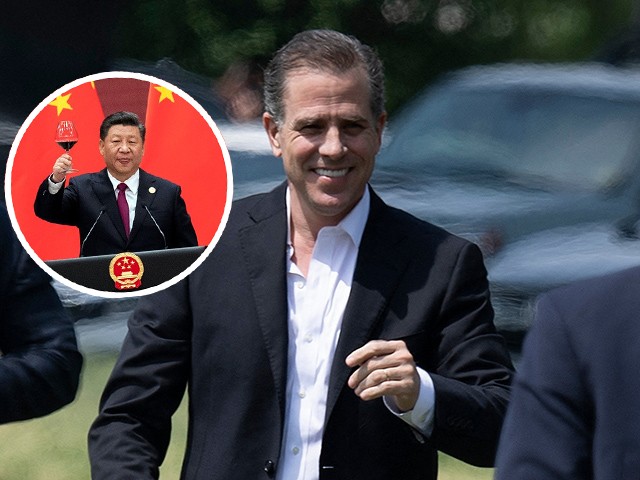 BRI first appears early in Red-Handed with Hunter Biden’s effort to use Chinese money to buy the national railroad of Greece. Hunter’s partner in this endeavor was the China Open Shipping Corporation (COSCO), a firm owned by the Communist government and closely linked to the People’s Liberation Army (PLA).

China hoped to push BRI’s influence into the heart of Europe and develop a network of ports, picturesquely described as a “string of pearls,” that could be used by the PLA to challenge American naval power in the Atlantic. Through COSCO, the Chinese government offered Hunter an incredible sweetheart deal because it wanted to take advantage of his personal connections in Greece.

Fortunately for the free world, Hunter and his Chinese partners were outbid by the Italian national railroad company, but Belt and Road is still tirelessly hunting for ways to penetrate Europe more deeply. In 2021, the European Union belatedly began pushing back with its own infrastructure program, “Global Gateway.”

Hunter’s most notorious link to BRI – notorious, that is, for everyone except the mainstream media reporters who adamantly refuse to investigate any of this stuff – was through CEFC China Energy, a conglomerate headed by the once-famous but now-vanished young tycoon Ye Jianming.

The documents discovered on Hunter’s laptop – a story major media outlets and social media companies worked furiously to suppress during the 2020 election — included information linking Biden’s son to the CEFC conglomerate, including the email that said ten percent of one CEFC venture would be “held by H for the big guy,” most likely a reference to Joe Biden himself.

CEFC threw millions of dollars at Hunter, despite his lack of relevant skills or experience for the positions he nominally held in the company’s endeavors. This created friction with professional money manager Tony Bobulinski, who would eventually become a whistleblower — only to be disappeared by Biden-friendly U.S. media outlets almost as thoroughly as the Chinese Communist Party made Ye Jianming disappear.

Red-Handed quotes emails from Hunter that indicate he knew the company was linked to the Chinese state and PLA intelligence. For that matter, the book points out that CEFC made no great secret of its mission to serve “China’s national energy strategy,” and that mission included buying assets in Europe and the United States. Bobulinski bluntly told Hunter to stay away from CEFC, but his warnings were ignored.

CEFC wasn’t just an opportunistic business enterprise making big bucks from Chinese military contracts. Red-Handed notes one of the company’s analysts wrote a belligerent editorial for Chinese state media in 2011 advocating the use of military force to drive Western oil and gas companies out of the South China Sea.

The Obama administration — in which Hunter’s father was vice-president — was well aware of BRI’s role in China’s effort to supplant American influence around the world. As an added dollop of evil, BRI projects have more recently been accused of using forced labor. It would be very difficult to make the case that Hunter had no idea who he was teaming up with.

In a final and comically obvious effort to purchase the Biden family’s political influence, CEFC hired Hunter as one of Ho’s defense lawyers, even though Hunter did not have criminal defense law on his resume. Hunter admiringly referred to his client as “the f**cking spy chief of China” in a recorded phone call discovered on his Laptop From Hell.

Red-Handed takes pains to describe how plenty of Republican politicians have been drawn into the orbit of Belt and Road as well. BRI has trillions of dollars to spend and loan. It needs to buy political influence to lubricate its big-money deals.

BRI is so huge that Americans and Europeans who should know better convince themselves to overlook BRI’s long-term geopolitical goals so they can make deals with Chinese state firms — or take jobs lobbying for BRI’s interests after they leave government offices.

In Greece, BRI needed Hunter Biden to make introductions between Chinese state enterprises and influential Greeks. In America, BRI needed Hunter’s connections to assuage concerns about selling American assets to Chinese state enterprises with military connections. In all cases, BRI operatives were willing to spend a lot of money to buy the Biden family name.