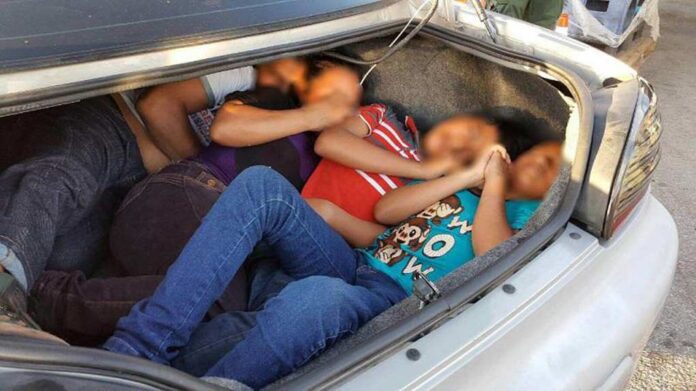 When we talk about the ‘American dream,’ there are many things that come to mind. Things like entrepreneurship, equal opportunities, civil rights, capitalism, etc. They are all good things, right?

I bet when you read the words ‘American dream,’ you didn’t think about crime or socialism or tyrannical rulers, did you?

Well, because most of us grew up knowing that America and the thusly, the American dream, was built on a foundation of liberty and justice for all. That working hard to meet your goals deserves rewards, and that crime doesn’t pay.

But as it turns out, not everyone in America seems to believe that.

Instead, those like White House Press Secretary Jen Psaki seem to think that illegal behavior is “part of the fabric of America” and “what the American dream represents.”

At least, that’s what she recently said during a press conference when talking about immigration.

If you haven’t heard, Democratic President Joe Biden recently announced that he would be inviting six immigration activists and Deferred Action for Childhood Arrivals (DACA) recipients to the White House to meet with him.

Undoubtedly, current immigration policies and possible reform will be discussed amongst the president and these six now-legal American citizens. After all, there is quite a crisis going on down at our southern border and proposals by leading Democrats to give amnesty to some 11 million illegal immigrants in the near future.

As DACA recipients, it means these now-immigration activists were once illegal aliens in the US as children. But, thanks to former President Barack Obama and his staff, they were given amnesty because they were but mere children who may or may not have entered America of their own volition and thusly were allowed to stay in the United States with certain legal protections.

Naturally, the question for many is what kind of message is President Biden trying to send, if any, by inviting these once-illegals into the White House.

In fact, Psaki was asked this exact question on Friday when speaking of the meeting to take place later that day.

But rather than saying that these individuals had a unique perspective and possibly insights into immigration, as DACA recipients, she tried to say that their illegal behaviors as children were part of the American dream and what makes our nation so great.

“Well, first, I think the President believes that DACA recipients are part of the American story and part of the fabric of who we are as a country and kind of what the American dream represents. So bringing them here is an opportunity to highlight that.”

She added, “And there has historically been agreement about the im- the powerful stories of DACA recipients, of the incredible contributions they have the potential to make in our country, from Democrats to Republicans.”

To be sure, DACA recipients do often have awe-inspiring stories of all the adversity they have overcome, from being part of human trafficking rings to becoming business owners living the American dream. And, of all the immigrants coming into the US, these are the ones we tend to feel the most sympathy for.

They are illegal immigrants, emphasis on illegal… They broke our national laws, plain and simple.

Since when is illegal activity part of the “fabric of who we are as a country?” Since when is breaking the law something the American dream represents?

The fact it doesn’t. It never has, and hopefully, it never will.

Yet, that’s precisely what Jen Psaki just said. Furthermore, she implied that this is what our president believes.

Immigration can be a good thing, an incredibly good thing, in fact. Hell, all of us were born of immigrants to this nation at some point. They are what makes up the melting pot of American society and, yes, what has constructed the American dream.

But only if they are legal immigrants, you know, the kind that comes through checkpoints like Ellis Island used to be and worked their way up to citizenship.

Any other kind, child or not, is simply not supposed to be here, let alone given rewards for such behavior. But that’s what Biden is doing, sending a message that illegal activity is fine and dandy and the borders should be open…